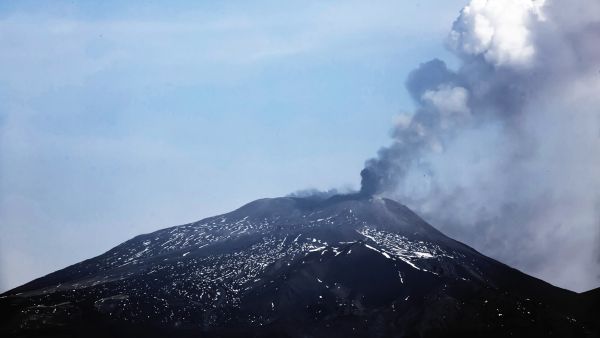 Russian scientists have established the patterns of volcanic eruptions, revealing the influence of the viscosity of magma on the shape of volcanic domes and the danger of their collapse. This will allow predicting such collapses and assessing the risk of a burning cloud – a mixture of high-temperature volcanic gases, ash and rock debris. The study is published in Geophysical Journal International. The study was supported by the Russian Science Foundation.

A volcanic eruption is the process of the outpouring of magma and the ejection of hot debris and ash by a volcano. Being freed from water and other volatiles when it comes to the surface, magma becomes lava. If the magma contains few crystals and a lot of dissolved gases, it is relatively low-viscosity and explosive. Medium viscosity lavas form gentle volcanic domes. If the viscosity of the lava, when it is squeezed out of the vent, is a billion times greater than the viscosity of honey, then an unstable object is formed that looks like an obelisk. Lava domes usually have a hard surface – a shell – but remain mobile and deform over days or even months. The collapse of such objects can cause an explosive eruption of magma, rockfall, landslides and the outpouring of pyroclastic flows – a mixture of high-temperature volcanic gases, ash and rock debris. For example, in 2018, 5.8 thousand residents of the Philippines had to be evacuated, who lived in the zone of risk of collapse of the volcanic dome. The collapse of the lava dome on the volcano Montagne Pele (Martinique Island) in 1902 claimed the lives of more than 26 thousand local residents, almost completely destroying the island’s capital, the city of Saint Pierre. To be able to predict such eruptions as accurately as possible, to protect people and infrastructure in time is an important task of volcanology.

Science has accumulated a wealth of experience in monitoring lava domes to predict the danger of their destruction. Indicators such as growth dynamics, structure of domes, their degassing, surface deformation and volcanic earthquakes are evaluated. In laboratory conditions, it is difficult to recreate a dome model that is quite similar to the original, and on volcanoes it is possible to obtain only indirect signals. Because of these limitations, the effect of magma crystallization and cooling on the dynamics of the extrusion of lava domes has been insufficiently studied.

Scientists from the Institute of Earthquake Prediction Theory and Mathematical Geophysics of the Russian Academy of Sciences (Moscow), the Institute of Mathematics and Mechanics named after N.N. Krasovsky of the Ural Branch of the Russian Academy of Sciences (Yekaterinburg) and the Institute of Mechanics of the Moscow State University named after M.V. Lomonosov set themselves the task of establishing a relationship between such observable quantities as height , diameter and surface temperature of domes with changes inside them. It was possible to create a two-dimensional model of the dynamics and stability of volcanic domes using the Ansis software system based on the finite volume method. This method allows you to divide the calculated volume of longwall into subdomains and, having compiled systems of differential equations for them, then find the required parameters by integration. The researchers found that the structure of the dome depends on the rate of crystallization of magma, whereas previously it was believed that the main influence comes from cooling. The faster the lava is squeezed out, the less time it has time to crystallize and the lower its viscosity. Based on the calculated distribution of stresses inside the dome, it is possible to estimate the possibility of its collapse, leading to the formation of pyroclastic flows, which are the main cause of destruction and loss of life during such eruptions.

“This study allowed us to estimate the viscosity of magma. It is also possible to reconstruct the history of dome development by measuring the shapes of lava domes using computer vision and image processing theory. If we know how strong the dome and its shell are, we can predict its collapse and assess the danger of pyroclastic flows, ”says Ali Ismail-Zade, Doctor of Physics and Mathematics, Chief Researcher at the Institute of Earthquake Prediction Theory and Mathematical Geophysics of the Russian Academy of Sciences.