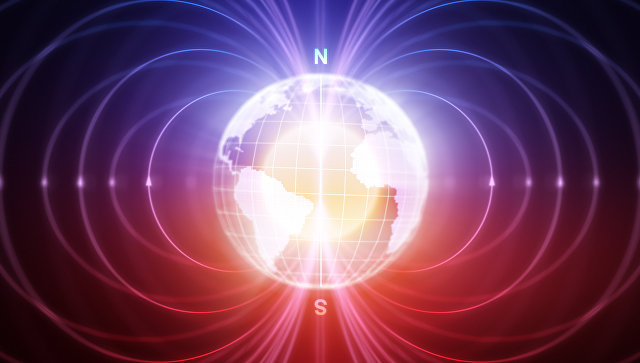 Geologists have studied the fluctuations in the strength of the Earth’s magnetic field over the past two thousand years and have come to the conclusion that the next revolution of its poles will occur at a special “magic point” in South Africa, according to an article published in the journal Geophysical Research Letters.

“Now we know that this point behaved unusually at least a few times before the current weakening of the field, and that this is part of a longer oscillation of the Earth’s poles,” said John Tarduno of the University of Rochester, USA. According to him, it is not yet known whether the process will lead to a complete coup.

Two years ago, Tarduno and his colleagues made a discovery – they discovered a magnetic anomaly in South Africa off the Limpopo River, where the force of the field fell sharply and fell to critically low values ​​in the 13th-16th centuries. This indicated that the upheavals of the Earth’s poles do not occur randomly, but at special points with anomalous properties.

This led the Tarduno team to check whether the strength of the magnetic field was changing at this point and in other periods – during antiquity, the Middle Ages and the last two centuries. To do this, geologists used the same technique that helped them make their first discovery.

Then they noticed that the rituals traditionally used by the Bushmen tribes to clean their settlements of “evil spirits” and insects have one side effect, not related to religion, but to science.

Burning their huts, cattle pens and other buildings, the South African aboriginals “wrote down” information about the strength, location of the poles and other properties of the Earth’s magnetic field in clay deposits, on top of which their houses were built.

Many rocks, including clay, contain iron atoms and granules of rocks containing it, in which information about where the magnetic field of the planet was turned and what power it possessed at the time of their formation was recorded. If the clay is heated to a certain temperature, the “printed” information in it on the magnetic field is erased, and it is overwritten with data on its current state.

After spending two years searching for ancient and relatively modern Bushman sites, scientists extracted clay samples from them and restored the picture of the evolution of this magnetic anomaly from the 4th to the 18th century AD.

As it turned out, the Earth’s magnetic field was sharply weakened at this point in Africa at least three times – at the time of the fall of the Roman Empire, in 400-450 AD, as well as at the beginning and at the end of the Middle Ages: at the beginning of the VIII century and between 1225 -1550 years. These attenuations, according to scientists, are related to the general fall in the strength of the Earth’s magnetic field, which has been observed in the last 160 years.

All this, according to Tarduno, indicates that the South African magnetic anomaly is indeed a special point on the surface of the Earth. In the past, there have already been reversals of magnetic poles, and probably this will happen again in the near future.

Geologists believe that further observations will help to see the first signs of this process and prepare for possible consequences.