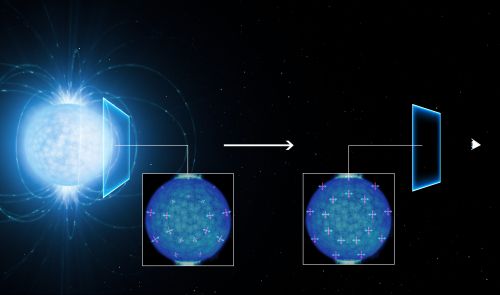 Studying light which is let out by unusually dense and strongly mesmerized neutron star by means of Very big telescope (Very Large Telescope, VLT) the European southern observatory, astronomers, perhaps, have for the first time confirmed with observations the mysterious quantum effect for the first time predicted in the 1930th. Polarization of observed light indicates that the empty space around this neutron star is subject to the quantum effect known as double refraction in vacuum.

The scientific team headed by Roberto Mignani from National astrophysical institute (Istituto Nazionale di Astrofisica, INAF), Italy, by means of the VLT telescope installed in Paranalsky observatory, Chile observed the neutron star under the name RX J1856.5-3754 which is at distance about 400 light years from Earth.

Neutron stars represent very dense kernels of massive stars – at least by 10 times more massive, in comparison with our Sun – who have exploded as supernew at the end of an evolutionary cycle. These objects have extremely powerful magnetic fields, in billions of times more powerful, in comparison with magnetic field of the Sun which penetrate their surface and space vicinities.

This field is so powerful that they can influence properties of empty space around a star. Usually vacuum is represented ideally empty, and light has to pass through him without changes. However in quantum electrodynamics the space is filled with the virtual particles which are continuously appearing and disappearing. Very powerful magnetic fields can modify this space so that it begins to exert impact on light passing through him, polarizing it. Analyzing the data collected by means of the VLT telescope, Mignani’s team has found linear polarization of light which extent makes 16 percent.
“This high extent of linear polarization which we have recorded can’t be explained differently, except as with attraction of ideas of quantum electrodynamics of double refraction in vacuum”, – Mignani has told.