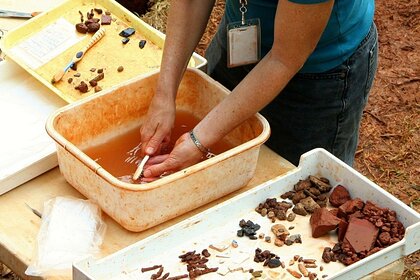 Archaeologists have found a two-thousand-year-old leather boot in an Austrian swamp. According to scientists, the shoes slipped off the feet of a person who stepped into the sticky mud.

The boot was found next to a wooden road, its age is also estimated at two thousand years. The road is a set of planks stacked in a row on which people could safely walk or drive through the swamp. In addition, a cart axle was found next to the road – according to experts, it broke down when the owner was driving it over bumps.

It is noted that, thanks to the acidic environment of the bog, the objects were able to survive well in it. “The shoe, lost and found 2,000 years later, is the oldest shoe from Lower Saxony to date, and is an extremely personal testimony to the past,” said Björn Tumler, Minister of Science and Culture of Lower Saxony.