Scientists have found an “alien” microbe in Yellowstone 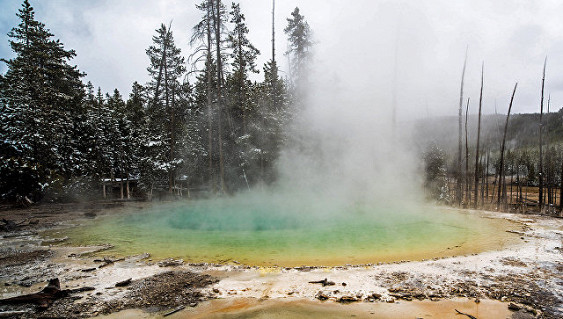 Biologists have found in the hot springs in Yellowstone an extremely unusual microbe, which grows well only when there are “low-calorie” food resources, and does not multiply with an abundance of “high-calorie” food.

“This discovery was extremely counterintuitive – usually the richest sources of energy support the largest number of microorganisms, and” bad “food does not interest anyone.” It turned out that this is not the case for Acidianus, which can be compared to the mining business – if ore extraction costs more than You can get money for its sale, then even the richest deposit has no value, “says Everett Shock of the University of Arizona in Tempe, USA.

Lakes and geysers in the mouth of the Yellowstone super volcano in the west of the USA are among the most extreme and bizarre habitats on Earth, where extremely unusual microorganisms live, able to live in “infernal” conditions, carry huge doses of radiation, heat, eat sulfur and live in almost pure Acid.

The study of such microbes, as scientists hope, will help us understand how great are the chances for the origin and existence of life outside the Earth and in what conditions it can survive or prosper. Some microbes found in such extreme corners of the Earth, in principle, could survive and reproduce in the deep layers of the soil of Mars or in the waters of the moons of Saturn or Jupiter.

Shock says that scientists have long believed that such microbes “pioneers” should have the ability to eat the most “inedible” chemicals and extract maximum energy from them. Guided by this idea, biologists today are looking for similar bacteria and archeas, watching how well they grow in different nutrient media and how greatly their fertility increases when switching to new, more “caloric” types of food.

The discovery of the Archaean of the genus Acidianus, according to Shock, markedly changed the views of his team on how to find such microorganisms and assess their vitality.
“When we extracted Acidianus from the waters of one of Yellowstone Park’s streams, we offered them three kinds of food – hydrogen and sulfur, hydrogen and iron, and iron and sulfur.” ​​To our surprise, microbes grew best on the poorest source of energy, and worse All – on the richest “, – the scientist continues.

This behavior of the archaean surprised scientists – they could “digest” all three types of chemicals, but for some reason preferred to use hydrogen and sulfur, the reaction between which produces less energy. This means that Acidianus voluntarily gave way to other bacteria that can extract energy from the reactions between hydrogen and iron and sulfur and iron, and thereby multiply faster.

Why Acidianus are so “economical” and prefer to live in conditions of energy shortage, Shock and his colleagues do not yet know. Nevertheless, scientists suggest that such strange preferences are dictated by how well these three types of food are available in the waters of Yellowstone creeks and lakes.
Hydrogen and sulfur, biologists believe, can occur more often and less often disappear from the waters of these geothermal reservoirs, which could push Acidianus to an evolution toward the consumption of only these two substances, which protects them from extinction with the temporary disappearance of iron from the waters of lakes and streams.

In addition, the very extraction of iron from water and its “digestion”, as observations of other bacteria show, is quite an “expensive” treat for the microbe, because for this it has to grow special electrically conductive “antennae”, the work of which requires a lot of energy.

All this, respectively, indicates that not all microbes on Earth and beyond can use the most “caloric” types of food for their survival and prosperity. This discovery, according to Shock, should change our understanding of how and where to look for traces of extraterrestrial life and exotic life on our planet.