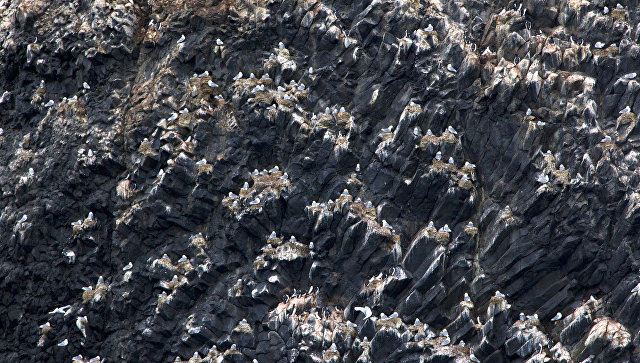 Mountains of a bird’s dung which birds leave in the Arctic every summer play an unexpected role in delay of global warming, emitting ammonia and some other the gases promoting saturation of the atmosphere the droplets of aerosols reflecting sunshine.

“This new and extremely surprising mechanism, direct link between the ecosphere and the atmosphere, emphasizes that, many components of climatic system of Earth are how interconnected and bound among themselves” — Jeff Pierce from Colorado State University in the Fort Collins (USA) has declared.

It is considered that aerosols — microscopic drops of liquid substances and firm particles — reflect a part of sunbeams and promote condensation of moisture in clouds that considerably cools our planet. Most of climatologists assumes that the most part of aerosols is formed thanks to effect of vapors of ammonia and sulfuric acid in the lower layers of the atmosphere.

Pierce and his colleagues have disclosed extremely unexpected and strong source of similar aerosols, watching strange sharp splashes in number of particles of aerosols at northern coast of Canada which occur in every summer.

Studying time of emergence of these aerosols and related clouds, and also concentration of their drops in different corners of the Arctic, scientists have found hints that they appeared and disappeared in those days when migratory birds arrived or flew away to Canada or from Canada.

The main trace of their activity and presence in the Arctic as scientists have paid attention, huge heaps of sewage and guano which birds leave on coastal “bird’s markets” are. All this excrement, in turn, contains a large number of organic chemistry which gradually decay bacteria on ammonia and other inorganic compounds of nitrogen.

Relying on this idea, scientists have checked whether why the share of aerosols in the atmosphere of the Arctic sharply grows in the summer can explain this ammonia. For this purpose they have developed computer model of “a bird’s market” by means of which they have calculated amount of the ammonia emitted guano birds and concentration of aerosols, related.

As showed these calculations, the effect of these “bird’s” aerosols is really huge – their dung throws out a lot of ammonia that there will be enough microdroplets of liquid generated by it considerably to lower amount of the solar heat reaching the Earth’s surface. In general, thanking guano birds the share of aerosols in air of the Arctic grows by 10-50% during summer that helps the planet to cool itself in the most vulnerable point for climate.

What is interesting, one more part of the ecosphere of Earth – the sea microbes developing the second component of aerosols without which ammonia won’t work – the compounds of sulfur turning in the atmosphere into sulfuric acid takes part in this process.

The combination of their action on the atmosphere of the Arctic, according to scientists, can partially explain why global warming goes not so quickly in recent years as it on specifies the growth rate of concentration of CO2 in the atmosphere. Salutary action of colonies of birds on climate as Pierce and his colleagues hope, will force the authorities of the Arctic countries to belong to their protection against poachers and diseases more responsibly.