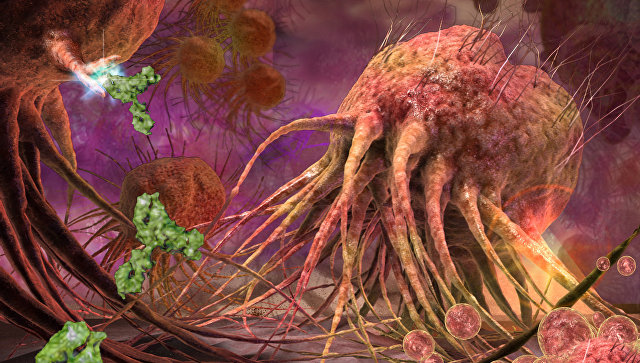 Scientists from Yale University have accidentally discovered the secret to ultra-high aggressiveness of skin cancer – it turned out that his cells are able to fuse with immune cells and acquire due to this ability to move independently.

“Now we need to understand how actually the process of merging. It seems to us, there are many stages and each one can choose the key to be broken. In the future we will be able to suppress metastasis of melanomas, preventing this merger,” said John Pawelek (John Pawelek) from the University of Colorado at boulder (USA).

Today scientists believe that the immune system usually copes with the containment of primary tumors, the cells which are inside them. But when the cells acquire the ability to move yourself, there are metastases, which are the immune system for some reason just does not see and does not try to suppress it. According to current statistics from the American health services, about 90% of deaths of cancer patients have metastases.

Pawelek and his colleagues found an explanation as to how metastases occur and why the immune system will not touch them, almost by accident, studying the curious incident of skin cancer in humans, which previously passed the procedure of a bone marrow transplant.

Detailed study these cells the scientists came to the conclusion that such a strange combination arose from the merger of lymphocytes (immune system cells that destroy cancer) and melanoma cells. This resulted in a cell with some characteristics of lymphocytes, including his mobility, but it continues uncontrolled.

Similarly, as scientists believe, there are other types of metastases with the development of other types of cancer. Suppression of this process, according to Pawelek and his colleagues, will significantly increase the survival of patients and will facilitate their lives.