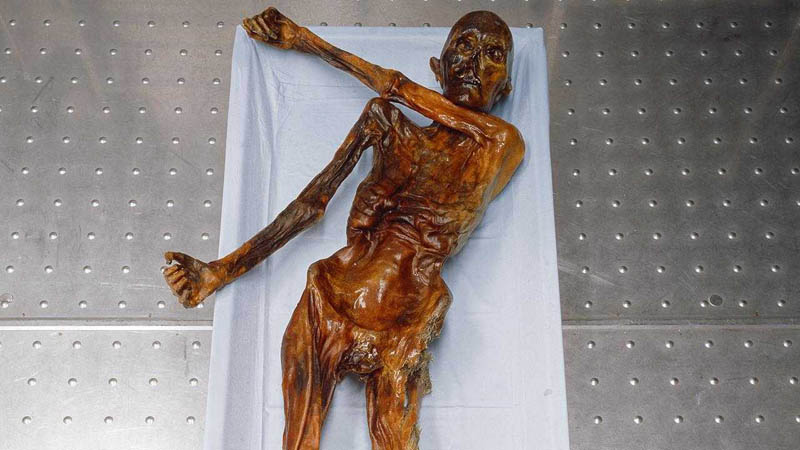 Swiss anthropologists decided that the real cause of the death of Etsi, whose mummy had lain in the Alps for almost 5,500 years, was hypothermia.

The mummified body of a man, found by tourists in the Swiss Alps in 1991, has survived so well that scientists are still exploring it, revealing all the new details of a person’s life 5300 years ago. With a certain accuracy, the picture of Etsi’s death was restored. Numerous injuries, traces of wounds and bruises all over the body, stuck in the shoulder a stone arrowhead, as well as traces of the blood of four people can indicate the violent nature of death.

An important refinement of this picture was presented by Frank Rühli from the University of Zurich, speaking recently at the annual meeting of the American Association of Physical Anthropologists. Rühli and colleagues conducted a new study of the remains of Etsi using X-rays and computed tomography and gave a new reconstruction of his death. The authors showed that a not too deep penetrated arrow broke several vessels, but did not cause serious damage or bleeding that could lead to death. According to their estimates, Etsi lost only about 100 ml of blood – this amount can cause only slight weakness, but not death.

The same conclusions were made by scientists about other injuries on the body of a man, including even skull injuries, which many consider lethal. In the opinion of Rühli and his colleagues, Ezi received them sooner if they accidentally fell to the ground, and not from blows with a baton. At the same time, his head was thick enough fur hat, which probably significantly reduced the damage. Tired and traumatized, Etsi just froze in the mountains, – conclude the Swiss anthropologists.