Scientists have found out when Jupiter was born 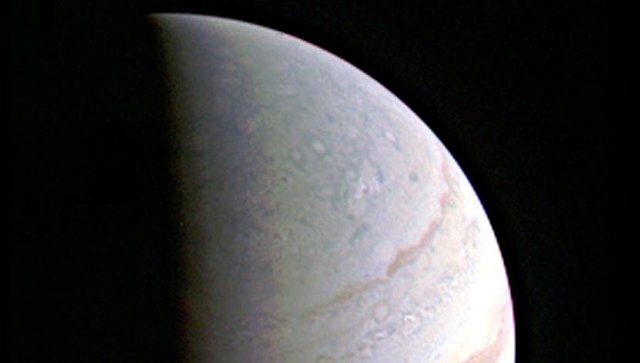 The rare meteorites which have arisen in the first days of life of Solar system have indicated that Jupiter was born unexpectedly late, approximately through 5 million years after the birth of the Sun and the first asteroids, scientists in article published in the Science Advances magazine declare.

“We have shown that the birth of Jupiter had to “mix” in a special way a belt of asteroids and force asteroids to face in him very high speed necessary for formation of CB chondrites. Thus, one may say, that these meteorites are the first example of how the Solar system has felt the terrifying power of Jupiter on the skin” — Brandon Johnson from Brown University (USA) has declared.
Conductor of Solar system

As today scientists consider, the Solar system has begun to be formed as a result of a gravitational collapse of a huge interstellar molecular cloud about 4,6 billion years ago. The most part of substance has gone for formation of a star – the Sun, and the rotating protoplanetary disk from which further there were planets, their satellites, asteroids and other small bodies of Solar system was created from other substance which hasn’t got to the center.

Earlier was considered that all planets were created approximately in those orbits where they are now. Today astronomers consider that Jupiter and others of giant planets were “sculptors” whose migrations towards the Sun and towards suburbs of Solar system conducted formation of “germs” of Earth and other stony planets and their interaction with each other.

Johnson and his colleagues have found out when this process has begun and when there was Jupiter, studying rather rare meteorites, fragments of the most ancient asteroids created as a result of the most powerful “space road accidents” in Solar system.

These “heavenly stones”, so-called CB chondrites, represent the porous stony structures similar to pumice comprising a set of balls from alloy of iron and nickel that is extremely unusual to asteroids of this type.

Chondrites as today scientists consider, were formed in the first days of life of Solar system when there were no planets, comets and other small celestial bodies yet. As a rule, chondrites extremely seldom contain metals as they never endured heating to high temperatures and weren’t melted.

CB chondrites are an exception in this regard – in them the share of metals is record-breaking high for asteroids of this kind. Therefore many astronomers read that they actually aren’t chondrites as it is extremely difficult to explain appearance of metal balls in them, using the standard theories of the birth of Solar system.

“Evaporation of iron in meteorites can happen only at very high speed of collisions. It is necessary to disperse it to speed in 20 kilometers per second only to begin to think of it, and normal models of the created Solar system at best “disperse” asteroids only to 12 kilometers per second” — the planetologist explains.

Johnson found the response to this riddle, studying structure of metal balls in such meteorites. He found out that all of them were created approximately through five million years after there was matter of all remaining types of chondrites.

The so synchronous appearance of CB chondrites suggested to him an idea that as a push for their birth, in literal and figurative sense, the migrating Jupiter which “reshuffled” a pack of the born asteroids and forced them to face with each other could serve.

It checked this idea, having created computer model of newborn Solar system in which Jupiter migrated towards the Sun in the first several million years of the life. It showed that there was enough its movement to force even rather large protoplanetary bodies whose diameter made 90 or 300 kilometers, to face with each other at very high speeds reaching 33 kilometers per second.

Such collisions continued very not for long – about 500 thousand years. Respectively, it is possible to say that Jupiter was born actually along with formation of CB chondrites – approximately through 5 million years after the first asteroids began to be created in Solar system after the birth of the Sun.

Similar time of the birth of Jupiter became big surprise for Johnson and his colleagues – earlier scientists read that giant planets arose very quickly as gas of a protoplanetary disk shall dissipate under pressure of rays of the young Sun. If calculations of authors of article are correct, then it was not so that can force scientists to revise the theory of the birth of Solar system.