Scientists have found out why naked navvies don’t feel pain 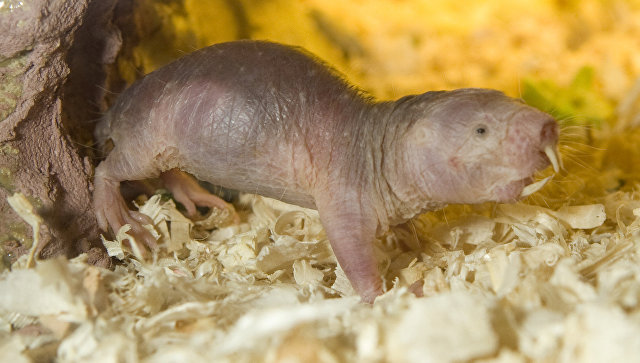 The cape naked navvies, rodents who have won death almost don’t feel pain for the reason that their gene which is responsible for “inclusion” of pain receptors differs on the structure on only one letter from similar genes of the person and other mammals, it is told in article published in the Cell Reports magazine.

“These animals live in underground in deserts, and they should use the mass of the efforts to get food. They have the lowest speed of metabolism among all mammals. It is possible to tell that evolution has disconnected in their organism everything that isn’t crucial for survival, including “excess” receptors on neurons” — Gari Lewin from the Center of molecular medicine of Max Delbryuk in Berlin (Germany) has declared.
The naked navvy (Heterocephalus glaber) — the unique mammal having a set of surprising properties. This hairless underground rodent of the size of a mouse and weighing 30-50 grams lives in east Africa. In the 1970th years scientists have found out that these beings live extraordinary long for the size and aren’t subject to cancer diseases. Besides, navvies practically don’t feel pain and don’t react to irritation of skin acids.

Delbryuk and his colleagues have understood why navvies almost don’t feel pain, having studied structure of those genes and the related proteins which are responsible for recognition of irritants and transfer of painful signals.

Dean of faculty of bioinformatics and bioengineering of MSU, director of Institute of physical and chemical biology of name A.N. Belozersk, academician of RAS Vladimir Skulachev

As scientists tell, the body of the person and other animals becomes hyper sensitive to touches, heat and other irritants in case his any part feels pain. It is connected with the fact that the system of “recognition of pain” in our organism consists of two components – genes and proteins TRPV1 and TrkA.

The first gene is directly connected with recognition and transfer of pain to a brain, and it as have shown experiences of scientific team of Delbryuk within which scientists have replaced the “zemlekopsky” TRPV1 version in mouse cages, doesn’t differ from how looks and as he is suited from a similar part of DNA of other rodents.

In turn, the gene of TrkA is a peculiar limiter of work TRPV1. He monitors existence in vicinities of a cage of molecules of the NGF hormone testifying to the beginning of an inflammation and damage of fabric. At emergence of a large number of the molecules NGF this protein forces TRPV1 to behave more actively that strengthens painful signals which neurons with these receptors send to a brain of an animal.

As it has appeared, the structure of this gene and protein at naked navvies not much more, but differs from how he is suited at mice and 26 other species of mammals. Replacement of only one amino acid has led to the fact that TrkA extremely poorly increases activity of TRPV1 at emergence of symptoms of pain as for his inclusion it is required in 10 times more of hormone molecules, than for the “normal” version of this protein. It as authors of article consider, and is a secret of why navvies don’t feel burns and poorly feel pain in general.

The similar assumption has found confirmation in experiments – when Delbryuk and his colleagues “have replaced” that version of a gene TrkA which is possessed by navvies in cages of mice, they became tolerant to pain too. Similar experiments on change of TrkA and other genes in an organism of live mice as authors of article hope, will help us to open also other secrets of navvies including their longevity.