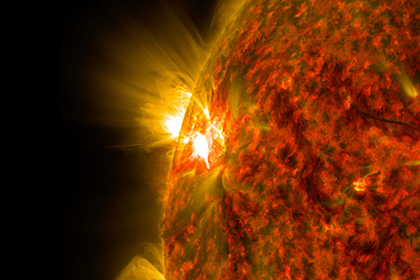 The American and Brazilian scientists found out why the external layer of the Sun rotates more slowly than its internal parts. Astronomers were engaged in the solution of this question the last 20 years.

The reason of the slowed-down rotation of external layers of the Sun in comparison with internal consists in Poynting-Robertson’s effect. According to this phenomenon predicted by the general theory of relativity, thermal radiation leads to increase in energy of a particle, but leaves invariable the impulse component directed on a tangent to a movement trajectory.

It leads to reduction of resultants of speed and an impulse of a particle therefore it gradually falls on a star. Except delay by radiation from a subsoil of the Sun of movement of external layers, the effect is responsible for fall of small particles for a helicoid trajectory on a star and gives a contribution to approach of planets to a star.

Authors came to the conclusions, having analysed dynamics of rotation of an external layer of the Sun which thickness constituted 150 kilometers through the SDO station (Solar Dynamics Observatory). Scientists note that more than five billion years ago Poynting-Robertson’s effect exerted much more noticeable impact on a star, than today.