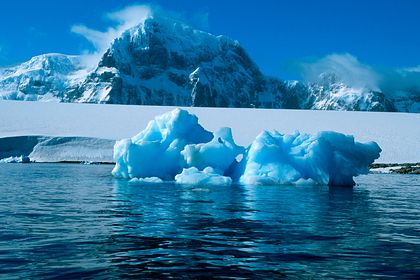 The ice caps of the North and South poles of the Earth interact with each other, grow and melt synchronously. This pattern was found by researchers from the Canadian McGill University, whose scientific work was published in the journal Nature.

Scientists have followed the history of the interaction of the Arctic and Antarctic glaciers, which dates back about 40 thousand years, studied samples of sedimentary rocks, ice cores, archives and other information. As a result, a computer model of ice change was created.

According to the data obtained, the cooling on the planet led to an increase in the amount of ice at the North Pole. This led to a decrease in the level of the World Ocean, from which the ice cap grew at the South Pole. These processes also work in the opposite direction: if the ice in the Arctic melts, the volume of water in the ocean increases, and the ice of Antarctica shrinks.

“Ice sheets can influence each other at great distances thanks to currents. It’s as if they are communicating with the help of changing the sea level ”, – noted one of the authors of the work Natalia Gomes.

Earlier it was reported that over the past 40 years, the thickness of the ice in the Arctic has halved, the average air temperature in winter increased by ten degrees.