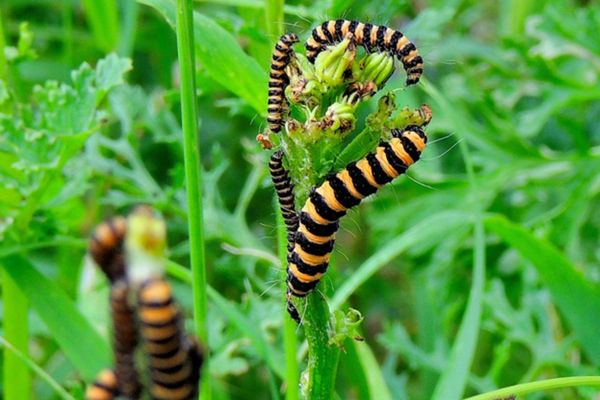 Scientists from the University of Bristol (England) have studied the behavior of birds when searching for food on vegetation. An article about this was published in the journal Current Biology.

Birds remember when they eat poisonous or unpalatable caterpillars and avoid repeating this experience. Callum McLellan and his colleagues found that birds remember not only the victim itself, but also its habitat.

“Cinnabar moths have a very recognizable look. They also live and feed only on the groundwort, which itself has characteristic yellow flowers. We have shown that birds know that wild rose flowers are a signal of danger because they indicate toxic prey. It is more effective to avoid the whole plant than to make decisions on individual caterpillars, ”the authors of the paper say.

To find out, scientists made mock-ups of a poisonous cinnabar moth with a bright orange-black warning coloration, as well as replicas of other caterpillars with a normal color. They were placed on the groundwort, as well as on blackberry bushes, where cinnabar moths usually do not live. The experiment showed that much more dummies of this and that type remained on the groundwort: the birds tried to feed on blackberries.

It follows from this that living on a unique plant can serve as additional protection.