Scientists have found that penguins took the place of dinosaurs 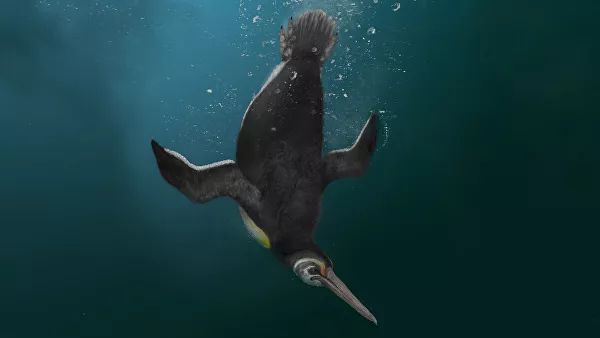 Scientists have discovered the oldest representatives of modern penguins, whose evolution began immediately after the disappearance of dinosaurs from the face of the earth. The discovery is described in the journal Palaeontologia Electronica.

After all non-bird dinosaurs became extinct 66 million years ago, their distant relatives – penguin-like – continued to develop actively. In the waters of the entire Southern Hemisphere, from polar to subtropical latitudes, giant penguins lived the size of a man and weighing up to 120 kilograms. Small representatives, similar to the modern penguins of Antarctica, represented, rather, a lateral branch of evolution. Very little was known about the time they appeared on the planet.

Recently, scientists from Australia, New Zealand and the United States discovered on Chatham Island in the South Pacific the most ancient penguin species of modern sizes and proportions, called Kupoupou stilwelli. In the language of the local Moriori people inhabiting Chatham, kupupu means a diving bird.

Between 2006 and 2011, paleontologists collected fragments of five skeletons of a new species on the island. Together with them, parts of two skeletons of a larger penguin species were found, which could not be identified or described as new due to the small amount of material. The kupupu penguin lived here 62.5-60 million years ago, when there was no ice cap at the South Pole, and the seas around New Zealand were tropical or subtropical.

The discovery allows you to fill the gap between the extinct giant penguins and their modern relatives. It is now known that small penguins began to develop as a side branch of evolution almost from the very beginning of the existence of penguins in the region east of New Zealand. It is here, from the archipelago of Chatham Island to the east coast of the South Island, that the oldest fossils of the first penguins are found.

“Next to its colossal relatives, including the recently described monster penguin Crossvallia waiparensis, the kupup was relatively small – no bigger than modern king penguins, whose height is 1.1 meters, – the words of research leader Jacob Blockland are quoted in a press release from the University of Flinders (Jacob Blokland) – The legs of the kupu were proportionally significantly shorter than those of their relatives, other fossil penguins. In this respect, he was more like today’s penguins, that is, he could walk on the ground. the first penguin with modern body proportions and the structure of the hind limbs – the bones of the foot and the shape of the foot. ”

The development of penguins began, according to scientists, even before the extinction of the dinosaurs, and the first penguins could well coexist on land and in the ocean with giant reptiles.

“We think that the ancestors of modern penguins originate from the line leading to their closest living relatives – albatrosses and petrels – during the late Cretaceous, and then many different species appeared after the dinosaurs became extinct,” says another study author Paul Scofield of Canterbury University – It is possible that penguins lost the ability to fly and acquired the ability to swim after the disappearance of dinosaurs. I think that the birds have undergone enormous changes in a very short time. If we ever find a penguin fossil from the Cretaceous, we will know for sure. “