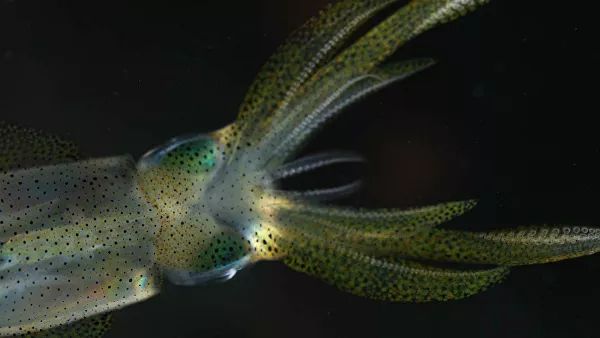 Australian scientists performed an MRI scan of Sepioteuthis lessoniana squid brain and found that it was comparable in complexity to a dog’s brain. The results of the study are published in the journal iScience.

Modern cephalopods, including octopuses, cuttlefish, and squid, have a very complex brain. Scientists from the University of Queensland for the first time conducted a detailed magnetic resonance study of squid brain and created an atlas of its neural connections.

99 percent of the 282 backbones that were previously identified were confirmed. In addition, researchers identified 145 previously unknown chains. Over 60 percent of all squid neural connections are involved in visual and motor functions. By the complexity of its structure, the squid’s brain was close to the dog’s brain.

“Modern cephalopods, a group of octopuses, cuttlefish and squid, have an extremely complex brain, approaching the number of neurons to the dog’s brain and surpassing the brain of mice and rats,” the words of the first author of the article, Dr. Wen-Sung Chang, are quoted in a university press release ( Wen-Sung Chung) of the Queensland Brain Institute. “For example, some cephalopods have more than 500 million neurons compared to 200 million in rats or 20 thousand in ordinary mollusks.”

This explains examples of complex behavior of cephalopods, including the ability to instantly change color to mask, recognize patterns, and communicate with each other using a variety of signals.

“We see that many neural circuits are designed for camouflage and visual communication, which gives squids a unique ability to evade predators, hunt successfully and interact with each other through dynamic color changes,” says Chang.

The found similarity of the central nervous system of cephalopods with vertebrates, according to the authors, confirms the convergence evolution hypothesis, according to which organisms in different groups independently develop similar features.

“The similarity to the well-studied vertebral nervous system allows us to predict the functioning of the cephalopods nervous system at the level of behavior,” the scientist notes. “For example, in this study, we identified several new networks of neurons that are responsible for visual-controlled behavior, such as locomotion and masking taking into account the shadow – when the squid take on a different color in the upper and lower parts of the body to better blend with the background. ”

At the next stage of the study, scientists plan to find out why different types of cephalopods in the process of evolution developed different divisions of the brain.

“We hope the results will help us understand why these amazing creatures exhibit such different behaviors and examples of complex interactions,” says Chang.