Scientists have found the flower smelling of the dying bee 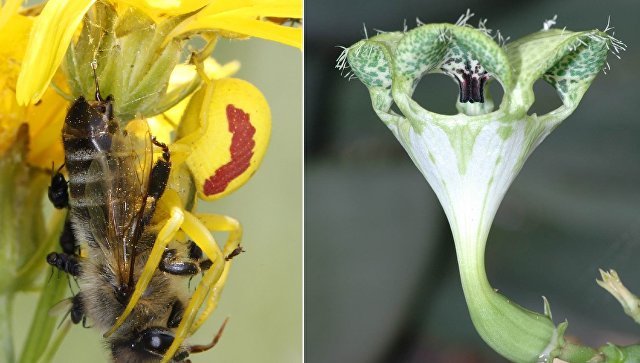 The popular decorative flower a ceropegia was “inventor” of extremely original and unusual scheme of deception of pollinators – it attracts carnivorous front sights with a smell of the dying bee, catches them in “cages”, covers with pollen and then releases, it is told in article published in the Current Biology magazine.

“At these flowers very difficult morphology which allows them to fascinate temporarily and then to release pollinators. We found out that “traps” at these flowers let out the substances similar to pheromones of alarm of bees that attracts front sights. When front sights arrive by these flowers, they are waited not by(with) a lunch, but a trap which cynically uses them as pollinators” — Stefan Doetterl from university of Salzburg (Austria) declared.

Detterl and his colleagues opened this unusual property of a flower which was considered rather ordinary as scientists and fans of plants, absolutely accidentally. Sitting on the street, two authors of article paid attention to what around flowers of a type of Ceropegia sandersonii was turned by the strange flies not similar to typical pollinators.

When scientists looked narrowly at these insects, they with surprise found out that they belonged to the sort Desmometopa, to number of so-called flies parasites. These flies are peculiar “jackals” of the world of invertebrate animals – they live near large predatory beings, such as spiders, and eat juice of bees who were killed by an eight-legged predator.

Watching process of feeding of these front sights, Detterl and his colleagues noticed that before the death the bee usually puts out a sting on which tip the poison drop appears. This drop as scientists explain, contains a large number of the pheromones warning other bees about danger. The same pheromones as showed observations of entomologists, attract also flies.

The Austrian biologists assumed that the same most “smells of the dying bee” can use flowers of Ceropegia sandersonii for attraction of flies. They checked this idea, having studied reaction of short moustaches of front sights – “jackals” on extract of aromas from petals and other parts of a flower and poison of a bee.

As showed this experiment, the smell of flowers and poison of bees really affected short moustaches of front sights equally, forcing them to consider that they fly to a body of the bee killed by a spider. Without having found a lunch, flies try “to run away” from a flower which difficult device doesn’t allow them to make it directly thanks to what insects completely smear themselves with Ceropegia sandersonii pollen. It helps flowers to pollinate each other, deceiving front sights freeloaders, and at the same time not to spend resources for production of nectar for a bait of these pollinators.