Scientists have found the oldest fossilized remains of life on Earth 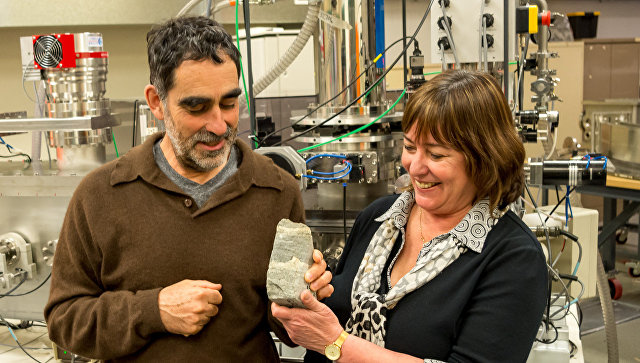 Paleontologists have discovered in Greenland fragments of rocks, which have preserved the most ancient today, the traces of life on Earth, whose age is more than 3.7 billion years.

The first living organisms appeared on Earth during the Archean era, and while there is no generally accepted point of view about how and when life began. To date, there is some fossil evidence that germs already existed in the primary ocean of the Earth about 3.4 billion years ago, but many scientists believe that life could arise much earlier in this level.

Three years ago, Japanese geologists have found hints that life has existed on Earth for about 3.7 billion years ago, studying samples of graphite from the isua formation, formed at the same time in Greenland. Many geologists have long believed these deposits traces of ancient life on Earth, but only the Japanese team was able to show by measuring the proportion of carbon isotopes in them, that they were left by microbes.

Allen Nutman of the University of Wollongong (Australia) and his colleagues found new evidence in favor of this idea, found in the isua formations these remains of ancient life on Earth, in the form of so-called stromatolites – layered stones and rocks, inside which are preserved the prints of microbes and their traces.

Stromatolites, like today, the scientists believe were formed in shallow waters in the primary ocean of the Earth due to the formation of large colonies of bacteria, waste products, and body which formed a kind of blanket, which gradually turned into sedimentary rock, rich in carbon and other organic matter, a characteristic striped appearance.

Similar rocks, containing traces of ancient life, how to tell Nutman and his colleagues, were found in the newly opened part of the deposits formation in Isua, previously covered with snow and ice. Inside them, as shown by the results of the autopsy contained large layered structures, conical imprints of gaps between target microbes and other possible traces of them, however, organic compounds in them is not preserved.

On the other hand, the chemical composition of the stromatolites is different from the content of the surrounding rocks, which suggests that they were formed or contained other substances compared to other rocks of the isua formation. This, according to the authors, is a serious argument in favor of the fact that they gave rise to the activities of the living entities, and that the outer side of the conical print is traces of microbes.

Of course, such conclusions as the article Japanese colleagues Natman likely will not be accepted by all the scientific community and many researchers will consider his group found the traces of stromatolites and abiotic activity in the soup of the primary ocean of the Earth. However, these prints, says Abigail Allwood, astrobiologist from NASA, yet really are the most ancient and reliable then that life on Earth already existed in about 400-500 million years after its formation.

If so, then scientists will have to rethink how they see life, and how random was born. The fact that at that time the Earth still continued to bombardirovschika large asteroids, leftover building materials from the formation of planets, and if life could form and survive in such conditions, it means that her appearance was not as random and unique as we believe today.

This, according to Allwood, significantly increases our chances of finding traces of life on Mars and planets outside the Solar system.