Scientists have found the traces of the ice age on Mars 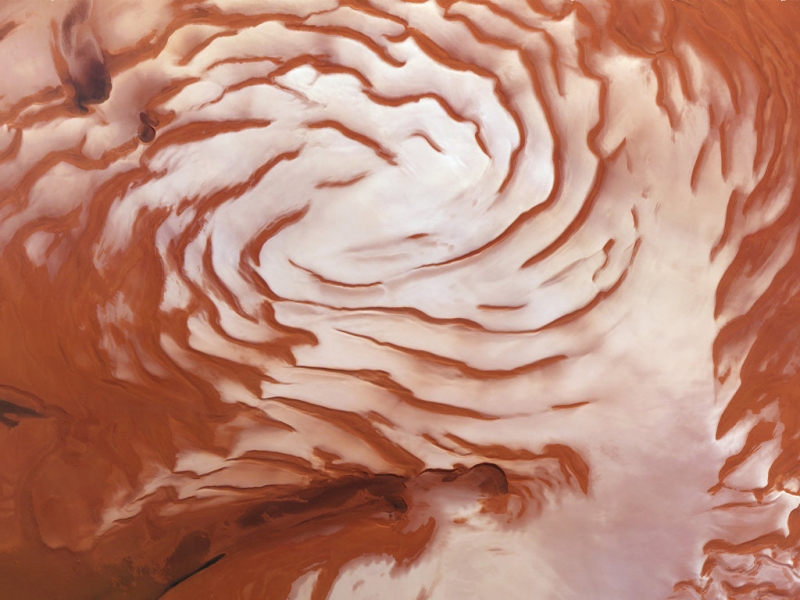 Radar images of the polar caps of Mars indicate that approximately 375 thousand years ago on the red planet the ice age ended, from which planet is gradually recovering today, according to the article, published in the journal Science.

“The climate on Mars changes much stronger than on Earth, since its axis of rotation “wobbles” much more than our planet has. Therefore, in the past Mars may have been very wrong, as we see it today,” said Isaac Smith (Isaac Smith) from the South-East research Institute in boulder (USA).

Analyzing data collected by the probe MRO tools in the study of deposits of water ice at the North pole of the red planet, Smith and his colleagues found that in the relatively recent past on Mars reigned ice age, from which he gradually “thaws”.

As the scientists explain, the ice ages on the planet comes not when it’s cold at the poles, and Vice versa, when it’s warm, so as a relatively warm climate promotes the formation of mobile accumulations of ice and their “overflow” in the middle latitudes of Mars. During interglacial at the poles, on the contrary, is cold, contributing to the growth the mass and volume of ice due to the water evaporating in the mid-latitudes.

The onset of ice in warm periods and retreat to cold times, according to Smith, should leave traces on the surface of Mars, visible to radar and optical instruments orbiting probes. Except also, traces of the movement and retreat of glaciers can be found in the iceon the pole, setting the rate at which  they accumulated or accumulate.

After analyzing hundreds of radar images from the MRO and photos obtained probes from the series “Viking” over 35 years ago, the authors of the article came to the conclusion that Mars relatively recently, about 370-375 thousand years ago, was in “captivity” of the ice age.

During the retreat of the glaciers at the poles of Mars, according to estimates planetary scientists have accumulated over 87 million cubic metres of water ice, this would be enough to cover the entire surface of the red planet water layer with a thickness of 60 centimeters. These water reserves are a surprise to scientists who expected to see three times less ice than show data from MRO tools.

According to Smith, ice melting continues today. Talking about it recently discovered traces of water movement on the surface of the red planet. Further observation of the glaciers, as a planetary scientist hopes will help to understand how it will look like Mars in the near future and how these changes impact on its potential habitability.