The discovery of the shark remains in the Amazon has helped scientists to prove that South America has experienced two “great floods” in the last 23 million years, during which the entire north of the continent became the ocean floor, according to an article published in the journal Science Advances.

“The pollen tracks in these sediments clearly indicate the existence of two periods of time when oceanic water from the Caribbean gulf flooded the northwestern part of the Amazon.Geologists have long argued about the nature of the rocks in this region and we were able to prove that they originated on the ocean floor and that These “floods” did not last long, “said Carlos Jaramillo of the Smithsonian Tropics Institute in Balboa, Panama.

According to Jaramillo, geologists often found “strange” rocks in the Amazon and other regions of the north of South America, which are usually formed on the seabed, rather than in the central parts of the continent.

Such discoveries have repeatedly led some scientists to claim that these regions could have been in the relatively pre-ice era, the bottom of the shallow bays and seas, and the exotic freshwater or semi-freshwater mega-lakes that existed long before their disappearance As a result of some geological or climatic processes.

Jaramillo and his colleagues found that the Amazon and northern regions of South America were flooded twice over the past 23 million years, studying rocks that formed in the plains and lowlands in western Venezuela and eastern Colombia 18-12 million years ago.

Here they managed to find extremely fossil fossils unusual for the land – shark teeth, fragments of shrimp shells and pollen of plants living near the seas or directly in the water. Studying the finds and comparing the structure of rocks in different layers of deposits, the team of Jaramillo came to the conclusion that the surface of the future Venezuela, Brazil and Colombia covered not a freshwater lake, but the ocean.

According to geologists, the first time the “great deluge” of South America occurred about 18 million years ago, when the waters of the Caribbean Gulf virtually instantaneously penetrated deep into the continent, advancing by 2.2 thousand kilometers to the south and flooding the entire western Amazon and other low-lying areas of the terrain. This deluge lasted relatively short by geological standards – almost all the flooded regions were re-landed approximately 900 thousand years after the onset of the cataclysm. 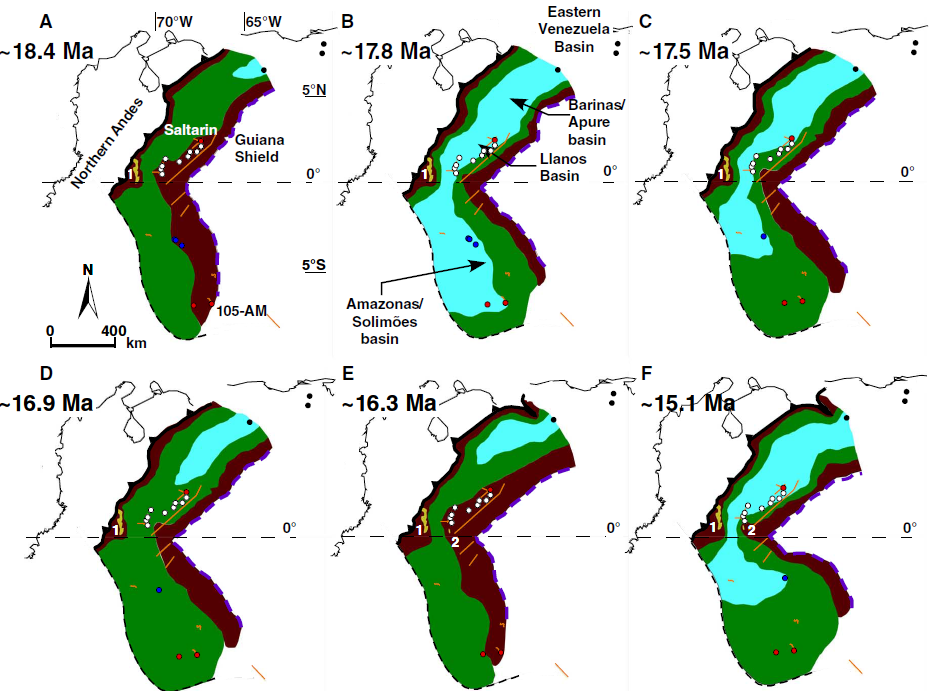 Regions in the north of South America, flooded during the “Great Flood”

The second, larger flood swept the north of South America about 16 million years ago, and this time the ocean’s waters receded only after 3.7 million years, but the Amazon and the central regions of the continent were flooded relatively briefly, for 400,000 years. At that time, a full-fledged marine ecofauna formed on the territory of all “drowned” areas, traces of which were found by scientists during excavations.

How many sushi managed to sink the ocean as a result of such a “skewing” of the continent, the scientists do not yet know, but plan to find the exact answer by studying samples of rocks of this time from other regions of the Amazon and the north of South America.