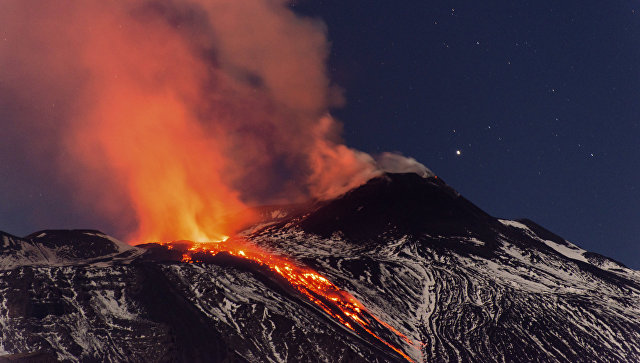 Most of the carbon dioxide and other gases emitted by volcanoes was generated by organic reserves, formed hundreds of millions of years ago, which indicates a deep connection between the evolution of life on Earth and the geological processes in its interior, according to an article published in the journal Science.

“This discovery makes us think about a complete reassessment of the entire history of the evolution of life.The results of our observations show that all estimates of the level of oxygen in the Earth’s atmosphere in the distant past may be completely incorrect, since volcanic CO2 emissions could radically change the isotopic composition of limestone deposits, according to which They were measured, “explains Marie Edmonds of Cambridge University (UK).

On Earth, as scientists explain, there is a kind of “carbon cycle.” Giant quantities of this element are constantly buried on the bottom of the oceans of the Earth, where they fall along with the remains of animals and plants, and no less large amounts of CO2 fall into the atmosphere together with volcanic emissions and other manifestations of geological activity.

Prior to the advent of the anthropocene, the “human era,” these processes were one of the main conductors of the Earth’s climate, as they determined whether the concentration of CO2 in the atmosphere was growing or whether it was falling. In the distant past, the imbalance in the “loss” and “profit” of carbon, associated with increased volcanic activity or the release of organic rocks to the surface, has already caused massive extinctions and once deprived the planet of all its oxygen reserves.

Edmonds and her colleagues found that this relationship between the evolution of life, the carbon cycle and volcanoes is actually much deeper than geologists assumed, by studying the chemical and isotopic composition of the eruptions of some 80 volcanoes from different parts of the earth.

As scientists note, geologists have long noticed that the composition of gases and magma emitted by different volcanoes can vary greatly, which was associated with differences in the mineral and isotope composition in those deep regions of the mantle, from where the lava moved to the surface of the planet.

Analyzing the concentration of helium and carbon isotopes in the emissions of these volcanoes, the scientists noticed something unusual – their share depended on the region of the earth these geological activity centers were located. For example, the carbon dioxide emitted by continental volcanoes contained much more “heavy” carbon-13 and less “light” helium-3 than the emissions of oceanic volcanoes.

The reason for this, as scientists say, was hiding in the distant geological past, and was associated with traces of life that existed on Earth hundreds of millions of years ago. The fact is that a significant portion of volcanic carbon dioxide emissions was generated not by the mantle, but by organic deposits that moved toward the mantle along with the earth’s crust, rather than the inorganic carbon reserves that existed in the bowels of the planet since its formation.

Such a discovery was a big surprise and a problem for geologists, as earlier scientists believed that the fraction of carbon isotopes in volcanic emissions are constant values, which almost did not change throughout the life of the Earth. This property of volcanic emissions scientists used to assess the amount of oxygen in the Earth’s atmosphere in the distant past, and to assess how the environmental conditions on the planet changed in different epochs.

Accordingly, the movement of the continents, their fusions and decays, had to greatly change the proportion of CO2 isotopes in volcanic emissions, as well as in the atmosphere and in sedimentary rocks formed from the remains of living beings. This all greatly complicates the restoration of the picture of how life developed on Earth, but at the same time points to a close relationship between its evolution and the behavior of volcanoes, the authors conclude.