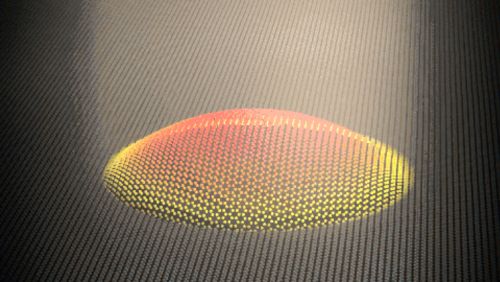 The scientist develop technology which allows to create the image by means of decanter bubbles — material from a layer of pure carbon, only 1 thick atom. Perhaps, in the future it will replace the modern LED screens as differs in high strength and very low energy consumption.

Researchers from the Delft technical university in the Netherlands developed a new technique which can become a basis of new technology of visualization once. It is about decanter bubbles which change color in the course of compression and extension. Scientists say that these “mechanical pixels” could make finally screens, stronger and flexible, than the modern LED, besides possessing far smaller energy consumption. Researchers mark, however, that development of technology just begins, and they should realize the authentic potential of system in the future.

This opening was made group of the scientists working with panels from oxide of the silicon covered with a decanter — a layer of pure carbon whose thickness makes only 1 atom. The sample of silicon possessed wavy structure with holes of approximately ten times more widely human hair therefore the decanter laid down on them as a membrane of the drum. During an operating time scientists paid attention that bubbles of a decanter changed color depending on internal pressure as light refracted through them, creating different colors.

“Grafen in the normal status is transparent as its structure so thin that light from it simply isn’t reflected. But we found a way out and just used a double layer of a garfen, having increased thus the reflecting ability”, the researcher Santiago Kartamil-Bueno says. As bubbles of a decanter are inflated or fall down, light waves should overcome different distance to reach a back, silicon wall. Thus, circumstances of what part of a luminous range it is absorbed and what is reflected, permanently change, as leads to appearance of different flowers.

The same principle is used by Mirasol technology of the Qualcomm company which controls the reflecting properties of a diaphragm by means of electrostatics. Similar methods of visualization allow to spare a large amount of energy as additional capacities aren’t spent for its maintenance. However thereby it makes impossible to create backlit screens so you should use the device with similar technology only in the conditions of good lighting. 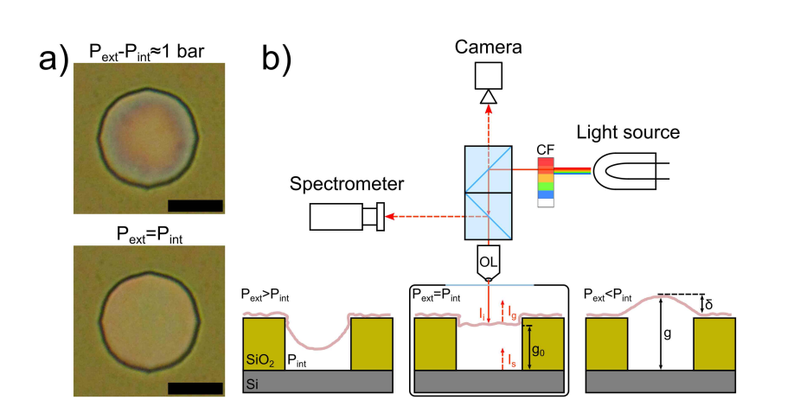 The tasks facing technology of visual display by means of a decanter are very diverse. For a start, it is necessary to understand that still all observations were conducted only under a microscope, and creation of the full-size screen will demand expensive and high-precision technologies. The pixels received as a result will be so small that creation even of their tiny image will require hundreds and thousands. Bubbles of bigger diameter it is impossible to make — the one-atomic layer as a result can simply burst. Besides, researchers still should learn how to create pure colors from bubbles. “I saw all iridescent range that is quite natural. However we didn’t manage to receive purely red yet or, for example, purely blue color”, is said by Santiago.

Clarification of how it is possible to control pointwise change of pressure in separate cavities will become the following investigation phase. Though the publication of work hasn’t taken place yet, Kartamil-Bueno says that at this stage material can theoretically be controlled by means of the same electrostatics, but then screens will work without illumination. Now researchers work on prototypes which they hope to finish to the technical Mobile World Congress conference in March, 2017.