Scientists have learned the temperature of lightning on the glass track 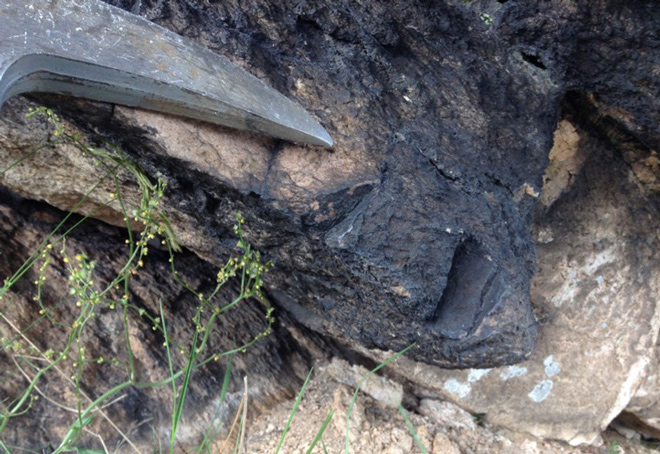 Benjamin Franklin, the founder of the University of Pennsylvania, experimented with lightning, using a kite and a key, almost taking their blow to themselves. In a new series of experiments, scientists have investigated the power of lightning in a less risky and much more technological way.

The work was conducted under the direction of Chiara Elmi from the Department of Earth Sciences and Ecology at the University of Pennsylvania. Scientists used a set of methods to study fulgurith – a thin layer of glass that forms on the surface of the rock when lightning strikes it (from the Latin fulgur – “lightning strike”).

Based on the analysis of the crystalline material in the sample, it was found that the minimum temperature at which a fulgurite is formed is approximately 1700 ° C.

“Previously, people used morphological and chemical approaches to studying rock fulgurites, but this is the first time that a fulgurite was classified from a mineralogical point of view,” Elmi notes. “I was able to adapt the approach I used to study the impact of meteorite impact on rock and sediment to analyze a tiny amount of material and understand the phase transitions that occur when lightning hits the rock.”

In last year’s study, Professor Reto Gere, with whom she collaborated, studied the rock fulgurite found in southern France and determined that the lightning strike transformed the rock layer beneath it at the atomic level, creating control structures called shock plates. In the new work, the team studied the glass layer to find out what minerals can tell about the temperature of lightning.

For this purpose, an x-ray diffraction analysis was performed to determine the content of minerals in the sample. The problem was that for this analysis, approximately one gram of material is required, and the amount of fulgurite 10 micrometers thick was not so significant. To adapt the technique to a smaller sample size, Elmi placed the material in a narrow rotating capillary tube and adjusted the diffractive optics to align, concentrate and direct the X-ray beam to the sample.

Analysis of fulgurith showed the presence of glass, as well as cristobalite, a mineral with the same chemical composition of quartz, but having a distinct crystalline structure. Cristobalite is formed only at a very high temperature, and the glass indicates that the top layer of the granite has melted during a lightning stroke. Elmi’s analysis allowed her to quantify the glass and residual minerals in the rock fulgurite.

“These two tracks indicate a system that was hit by heat,” Elmi explained. – The analysis also reveals the minimum temperature for glass production. Cristobalite is formed at about 1700 ° C, which means that this temperature was reached when lightning struck the rock. ”

The temperature of lightning in the air, according to measurements, is much higher – about 30 000 ° C.

The team carried out additional analyzes of the Fulgurite sample and found in it an organic material indicating that the lightning burned a lichen or moss growing on the surface of the rock, and then enclosed it inside the material.

“This is a very rapid development,” says Gere. – The rock heats up very quickly and also cools quickly, which leads to the trapping of gases in the glass, and some of these gases are formed by the combustion of organic matter. ”

In the future, the team hopes to develop a complete model of what happens to the stones during a lightning strike, including chemical, physical, biological and mineralogical observations. As scientists note, it’s amazing that lightning can turn granite into molten metal and completely change its structure, but some people, including Franklin, survive on impact.