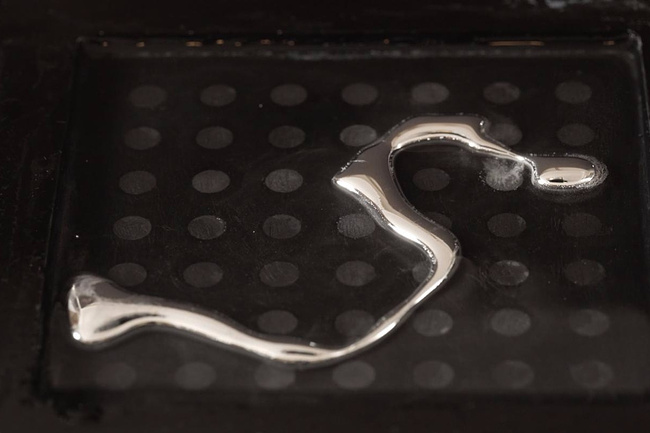 British materials experts have created a display of electrodes that can be manipulated with liquid metals: the controlled material takes on various two-dimensional shapes.

The creation of “programmable matter” is a long-standing aspiration of many researchers in the field of materials science and robotics. Such materials can change their appearance and form through commands of user programs. Controlled matter, moreover, must be safe to operate and be made from available raw materials. For decades of research in this field, scientists have discovered alloys with shape memory effect and constructed platforms that move light polystyrene balls. In recent years, materials scientists have focused on developing liquid programmable materials from metals, for which deformability is a consequence of their atomic structure.

Researchers from the University of Sussex and the University of Swansea studied the programmable properties of a liquid alloy. According to Sriram Subramanyan, one of the authors of the work, liquid metals are an extremely promising material for deformable objects, because it combines unique properties: voltage-controlled surface tension, low melting point and high electrical conductivity in the liquid state.

Scientists used a liquid at room temperature alloy, called EGaIn (¼ indium and ¾ gallium). A small drop of the alloy was applied to the electrode matrix, which is a square acrylic cell with inserted 49 (7 × 7) graphite electrodes and covered with sodium hydroxide solution.

The surface tension of liquid metals, which determines their geometric shape, depends on external electric fields. The control system sets, using charges of electrodes, a pattern that repeats the metal: the molten alloy repels from the positively charged electrodes (anodes) and is attracted to the negative electrodes (cathodes). In the publication, the scientists “drew” the alloy on the matrix with the letter S and the heart. In addition to the shape, you can also set the spreading speed of the metal.

The study, according to the authors, brings the creation of “soft robotics” closer. Although such an invention is something like a T-1000 terminator consisting of a “mimicry polysplav”, the construction of three-dimensional structures is still a long-term task. A direct application of the development of British scientists can be programmable printed circuit boards and conductive ink.

The results of the work are published in the report of the conference Interactive Surfaces and Spaces 2017, which takes place on October 17-20 in Brighton (Great Britain).