Scientists have proposed a way of salvation, the melting of the Arctic 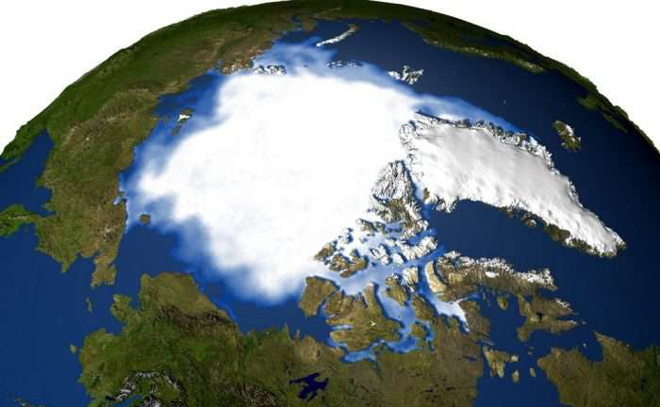 In addition to emissions of greenhouse gases, global temperature increases affect deforestation, ocean acidification and the disappearance of polar ice. In the new study, researchers from the University of Arizona has proposed how to keep the cap of the Arctic with geoengineering.

As scholars have noted, the current rate of decline of Arctic sea ice raises serious concerns. According to estimates, the ice disappears at a speed of 3.5–4.1 % per decade, and its overall losses since the beginning of satellite measurements in 1979 is at least 15 %. In 2016, the level of sea ice was the second lowest in the entire history of observations, and the worst thing is that the process is gaining momentum.

Global average temperature increased linearly with CO2 emissions and it is projected that by the end of the century it will increase by 3 °C or more. Almost all scenarios predict a reduction of year-round sea ice in the Arctic and almost an ice-free Arctic ocean by 2050.

One of the reasons why the Arctic is warming faster than the rest of the planet associated with the high albedo of ice. Fresh snow and ice reflect up to 90 % of the sunlight and the open water (which has an albedo of about 0.06) absorbs most of it. Therefore, the more ice melts, the more sunlight is absorbed, and the temperature in the Arctic is increasing.

The research team led by Professor Stephen dash from the School of earth and space research examined how the melting of ice due to seasonal fluctuations.

New, or annual ice that forms each winter, usually has a thickness of 1 meter. If he survives the Arctic summer, it can become a perennial, with a typical thickness of 2-4 meters. But because of the current situation, when the summer is getting warmer, first-year ice susceptible to seasonal heat, and the seam is split, even before starting to grow. If in the 1980s the years of multi-year ice accounted for 50-60 % of the total ice in the Arctic ocean, by 2010 only 15 %.

With this in mind, dash and his colleagues have proposed a way to help our annual ice to survive the warm summer. According to them, during the Arctic winter when the water freezes, you can upload it to the surface by pumps running on wind energy.

Calculations of wind speed in the Arctic have shown that wind turbine blades with a diameter of 6 meters will generate enough electricity to lift single pump water to a height of 7 meters at a rate of 27 metric tons per hour. Thanks to ice layers will become thicker and can withstand summer temperatures, becoming then stable multi-year ice.

Over time, the negative feedback produced by increased ice cover will contribute to less absorption of sunlight by the ocean and the accumulation of ice.

Although some of the details of the concept require improvements, it seems quite reasonable and takes into account the local seasonal changes and global. To implement this idea, according to scientists, is possible with a relatively modest budget of $ 500 billion a year for the entire Arctic, or $ 50 billion a year to “freeze” 10 % of the territory.