Scientists have proved the “hardness” of light 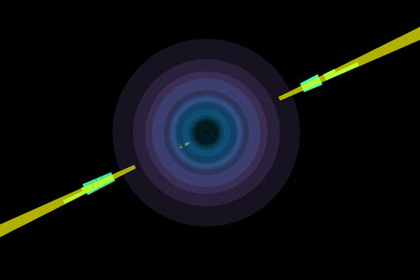 A group of scientists working at the Large Hadron Collider (LHC) at CERN (European Organization for Nuclear Research), during the ATLAS experiment, proved the existence of a phenomenon called light scattering in the light. The phenomenon consists in the quantum interaction of two beams of photons, as a result of which one beam of light is somewhat “refracted” by another, as if they are solid. The article of researchers is published in the journal Nature Physics, briefly about the discovery tells the publication ScienceAlert.

According to the classical ideas, electromagnetic waves pass through each other unhindered. However, in 1936 German physicists Hans Heinrich Euler and Werner Heisenberg predicted that two photons could collide and interact with each other. Under normal conditions, this effect is invisible, but it can be fixed using high-energy particles.

Scientists dispersed the lead nuclei in the accelerator tube to near-light (relativistic) velocities. The positive charge of electrons deprived of electrons forms an electrostatic field, which at high speeds turns into an electromagnetic field, that is, into a dense cloud of photons. Lead nuclei moving in opposite directions interact not directly, but during ultra-peripheral collisions, when clouds of particles strike one another. According to theory, photons from different clouds are scattered on each other, which generates new particles, which the ATLAS detector should register.

In total, the detector recorded four billion different interactions between the particles. Scientists conducted the necessary selection and identified 13 events, consistent with the pattern of light scattering in the world. At the same time, the share of extraneous processes that create the background and can make data unreliable was only 2.6 events. The main parameters of the process, including the cross section (the proximity of colliding particles) and the invariant mass (the particle exponent) correspond to the predictions of the Standard Model.

The standard model is a theory that describes the whole variety of particles and their interactions. It predicts various subatomic processes and their properties, which are confirmed in accelerator experiments, including at the LHC.