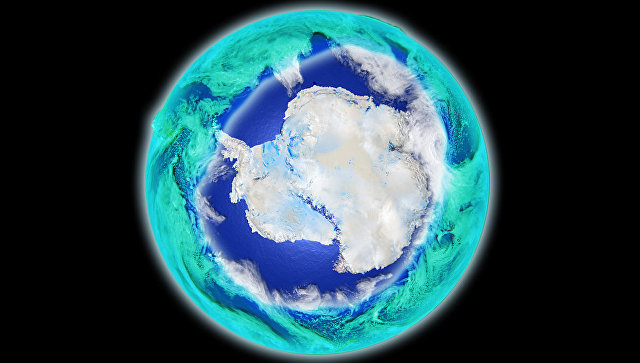 Atmospheric ozone forms above the Earth’s surface a spherical layer about 90 km thick that retards ultraviolet radiation. Since it is detrimental to proteins and nucleic acids, a decrease in ozone concentration in the atmosphere poses a danger to all life on Earth.

The amount of ozone in a vertical atmospheric column at a particular point is measured by the absorption and scattering of solar radiation in the UV range. The Dobson unit (e.D.) is used as the unit for measuring total ozone (OCO). 100 e.D. correspond to the thickness of the ozone layer of 1 mm, and on the average on the planet OCO is about 300 e.D.
The content of ozone in the stratosphere varies throughout the year. In large quantities, it forms in the stratosphere of tropical and middle latitudes due to photochemical reactions. In spring, ozone from the tropics is transferred to the middle and high latitudes. Therefore, for example, in the Southern Hemisphere the annual maximum of ozone is observed in October-November.

In the period from January to July, the concentration of ozone is minimal, since from December to April the middle and high latitudes are well illuminated by the Sun. This contributes to the destruction of ozone in photochemical reactions, the catalysts of which can be various compounds in the atmosphere.

The global interest in the ozone problem arose in the second half of the twentieth century. Scientists have found a long-term tendency to reduce the total ozone and to the seasonal – in October-November – the appearance of the famous Antarctic ozone hole (AOD).

This led to the hypothesis of anthropogenic destruction of the ozonosphere. In 1973, American chemists in a laboratory experiment found that the decay products of chlorofluorocarbons (freons) could destroy ozone. This result explains the process of the formation of the ANM.

In 1987, the world’s leading powers signed the Montreal Protocol: an agreement on the cessation of the production and use of freons, most known to people, such as coolants refrigerators. This led to a global replacement for refrigerators and air conditioners. In 2016 it turned out that the new refrigerants are also greenhouse gases, followed by an amendment to the protocol and a new ban.

Even before the signing of the protocol, data based on satellite observation of the ozone layer was known and showed that the ozone hole in the Antarctic is a natural formation. The anthropogenic chemical theory of ozone depletion, however, won. But she could not solve the question of why the ozone anomaly in its time “appeared” in the Southern Hemisphere, although freons were produced mainly in the North.

Moreover, theories and mathematical models of chemists can not be verified experimentally in Antarctic conditions. When signing the Montreal Protocol it was stated that the ozone hole in the Antarctic will completely disappear by 2010, but it appears every year to this day. So, in 2017, its size reached 22 million square meters. km, which is typical for the last 25 years.

To answer a number of questions connected with the problem of ozone hole formation, it was possible with the help of a new method of tracking the movements of air currents, proposed by Krasnoyarsk researchers. Based on an analysis of physical phenomena in the atmosphere, they developed their own model for the formation of an ozone anomaly in the Southern Hemisphere.

“It so happened that the geophysical problem – the state of the ozone layer of the Earth fell into the hands not to geophysicists and meteorologists, but to experts in atmospheric chemistry and is still considered a purely chemical problem.” Unfortunately, almost all studies of the ANM phenomenon are aimed at proving its anthropogenic origin .

Various chemical and photochemical reactions are proposed for this, mathematical models are constructed. At the same time, a significant amount of actual geophysical data is ignored, “comments Valentin Kashkin, a professor at the Institute of Engineering Physics and Radioelectronics at the Siberian Federal University.

According to the alternative hypothesis of the emergence of the Antarctic ozone hole, it is a natural formation caused by dynamic processes in the stratosphere. For justification, it turned out to be sufficient to use data on the total ozone content recorded by artificial earth satellites since 1978.

Like other atmospheric formations, ozone has a cloudy structure. If we compare satellite data obtained successively in two days, then the direction and velocity of ozone masses can be estimated from the movement of ozone clouds.
It turned out that in the beginning of September, the masses of ozone are transported from the South Pole towards the equator. Ozone moves along a screw trajectory, rapidly rotating from west to east and eventually accumulating in the ring near latitude 45 °. There is a redistribution of ozone between the ozone hole and the ring. The amount of ozone in the ring increases, and the OCO in the inner part decreases, contributing to the emergence of the Antarctic ozone hole.

Beginning in mid-October, the ozone hole begins to fill with ozone, which moves back from the ring and from the tropical latitudes. Analysis of digital maps allowed scientists to visually observe the movement of ozone from the pole towards the equator and back, its movement in the east and west direction with an estimate of the speed of movement.

September and October in the Southern Hemisphere is the time when ozone starts to flow from the tropics to the middle latitudes. Scientists have discovered an additional ring at 35 ° S, associated with this transfer of ozone. The ring passes near the latitude of Buenos Aires and Cape Town. Finally, the movement of ozone towards the pole forms the third ring at 80 ° S.

Scientists from SFU have developed a new methodology for analyzing the so-called “zonal means”. This makes it possible to more accurately predict the total ozone content for years to come. Tables of zonal mean are available on the Internet and are formed as follows: the area of ​​the globe from pole to pole is divided into rings with a width of 5 ° with the calculation of the mean value of the CCA in each of them.

“Using the analysis of zonal averages a year before the entry into force of the Montreal Protocol, NASA staff found that the total ozone content for 1979-1982 from 44 ° S to the South Pole remained almost unchanged from August to November, and its decline in September near the South Pole was compensated by an increase in the middle latitudes.

Such results indicated that the variations in the CCA are caused by the dynamic redistribution of ozone, and not by chemical processes. However, this undermined the anthropogenic theory of ozone depletion and the occurrence of ozone holes. The then scientific community did not take a similar result in the majority – the question was, in fact, closed.

But the history of the dynamic theory did not end there: we were able to answer a number of questions related to the problem of ozone hole formation. In particular, it was shown on a large amount of data that the amount of ozone trapped in the circumpolar vortex zone coincides with an accuracy of at least 5-7% with the amount that left the ANM. These results were presented by our team not only in journal publications – we also summarized them in a monograph published by the Siberian Federal University, “concludes Valentin Kashkin.