Scientists have reconstructed the toothy skull of a prehistoric bird 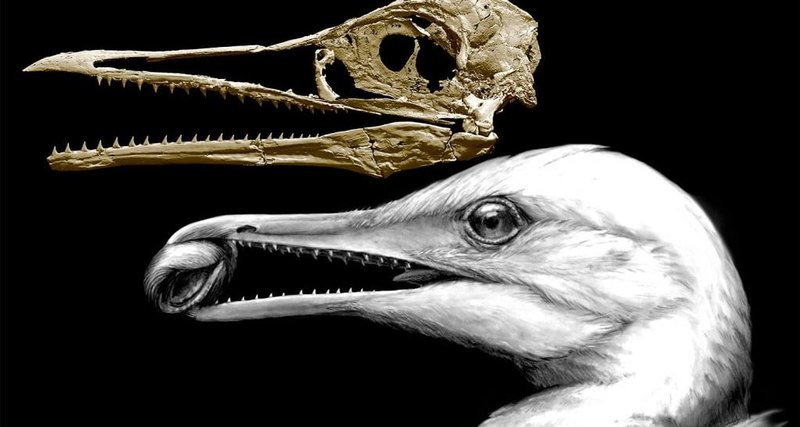 The first birds have not yet acquired full-fledged beaks, but did not have time to get rid of the dinosaur powerful toothy jaws. Scientists reconstructed the skull of one of these birds, who lived in the middle of the Cretaceous period; it was quite frightening portrait.

At the end of the Cretaceous period, 66-100 million years ago, quite large (slightly larger than seagulls) ichthyornis-shaped birds lived on Earth. They were very similar to modern birds, but would have seemed much more threatening: mouth full of small sharp teeth. Fossilized remains of one of these birds, Ichthyornis dispar, found in the United States, became one of Darwin’s arguments in favor of the theory of natural selection.

In 2014, a new skull of I. dispar was found in Kansas. After collecting the remains of two more individuals from the museums and making CT of all four skulls, a group of scientists from the United Kingdom and the United States reconstructed the appearance of I. dispar. This reconstruction answers many questions about the evolution of birds, and in particular sheds light on the origin of the bird’s beak.

In Archaeopteryx-one of the first birds known to science — the body was (according to recent reconstructions) capable of flying, but their heads resembled smaller copies of heads of flying dinosaurs. I. dispar was probably a transition between dinosaurs and modern birds. Unlike the latter, the toothy birds of the Cretaceous period had powerful jaw muscles (about this scientists learned from cavities and depressions in the skull in places of fastening of muscles), and the bone, which is the basis of the beak in modern birds, was shifted to the tip of the mouth. Similar skull structure and found many dinosaurs, But unlike the dinosaur, “beak” I. dispar were covered with keratin, and teeth in it was gone, and the tip was bent hook — like a real bird’s beak.
No modern bird has real teeth (dentin and enamel), although some have sharp growths on the inside of the beak.

Beak hook, crowning toothy maw, it was possible to wield as limb — to pick up twigs, brush his feathers, or to peck, the author of the work. Probably I. dispar ate fish and shellfish; he could get clams from the shell, using keratin-based hook at the tip of the mouth, and then tear pieces of prey powerful as the dinosaur’s jaws, researchers believe.

The brain I. dispar was quite large relative to the volume of the body; this feature is typical for modern birds. This fact, according to the authors of the study, raises doubts about the validity of the hypothesis that birds have acquired a large brain by saving space, getting rid of the jaw muscles. Most likely, birds need a big brain for complex navigation in flight,” the scientists conclude.