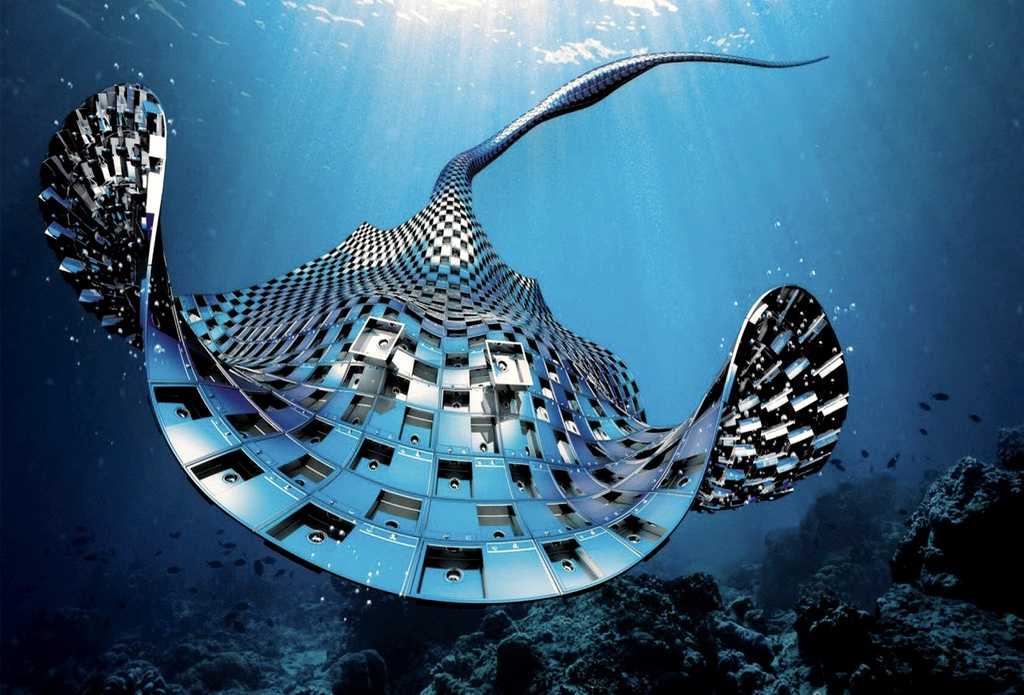 Imitating the movement of the ramp, this robot has neither an engine nor a screw turbine, but it swims dexterously and quickly. Its creator, Tiefeng Li of Zhejiang University, believes that such flexible structures will be economical and safe for research unmanned submarines, which will be able to study the remains of ships and coral reefs. Soft robots are also suitable for drawing up seabed maps and reconnaissance under water.

In an article published in the journal Science Advances, Lee and his co-authors describe a floating flexible device with remote control. Even externally it resembles a small slope weighing 90 g, 18.5 cm long and with a wingspan of 20 cm. The lithium battery insulated in silicone provides it with energy for three hours of continuous swimming. This battery and a pair of electromagnets that drive the tail “steering” are the only hard parts of the device.

Transparent “muscles” of the robot are made of a soft dielectric elastomer, an electroactive polymer that changes shape depending on the voltage applied to it. This allows him to move the “wings” and advance in water at a speed of 6 cm / s. The authors state that this is twice as fast as the previous record for unconnected devices, although so far slower than for real skates. But the robot showed that it can carry a miniature video camera and float in water, the temperature of which is from 0.4 to 74 ° C.

Chinese engineers managed to achieve high miniaturization and a long time of work without recharging with the help of another original solution. Instead of achieving full sealing of the electrical components of the apparatus, they, on the contrary, used water as one of the electrodes of its circuit.

When voltage is applied to the elastomer, it acquires a positive charge, attracting electrons from the surrounding water and deforming, slightly lifting the “wings” of the robot. Switching off the voltage returns to its original form, completing the motor cycle. This approach allowed to abandon additional layers of insulation, making the robot more compact, lighter and more flexible.