Scientists have shown the clever weapons of the future 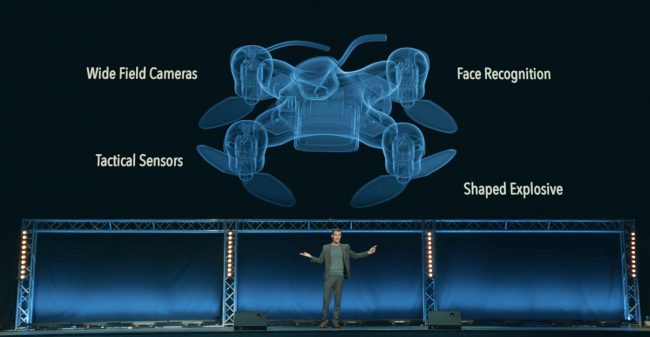 Employees of the Future of Life Institute, among which there are such famous figures as Stephen Hawking and Ilon Mask, have published an unusual video dedicated to the unhappy future, which awaits us all very soon. The video, shot in the documentary style, reminds us of the creepy TV series “The Black Mirror”, the creators of which regularly tell viewers what nightmare our life can turn into thanks to high technologies. This time the scientists decided to show how tiny the killer drones, endowed with artificial intelligence, with the help of which intruders will be able to kill almost any person wherever and whenever, can become terrible.

The video was first demonstrated to visitors to the United Nations General Assembly Meeting on Modern Arms, which was held in Geneva. It tells in a believable form how creepy the “smart weapon” of the future can become. Moreover, all the technologies shown in this feature film already exist today. It remains only to miniaturize them a little more and put them together. The main theme of the video were tiny drones, capable of calculating their victims with high accuracy and literally crashing into their heads, exploding at the same time. Drones keep a small swarm, track down the victim, if necessary, make holes in the windows to enter the room, as well as much, much more.

According to the plot, killer drones can serve both to governments of different countries, and terrorists, who can quite easily intercept control over them. The audience is shown how, with the help of these tiny killers, it is possible to commit an attempt on politics or in a matter of seconds to kill several university students right in the classroom, where not everyone is destined to be saved. Employees of the Institute of Life of the Future are sure that from these “point killings” you and I are separated for years. And then no one will be protected from suddenly appearing on his forehead a small hole from the directed explosion. We suggest you evaluate this short seven-minute film right now. Most importantly, do not forget that for today all this is still only science fiction, and not a harsh reality.