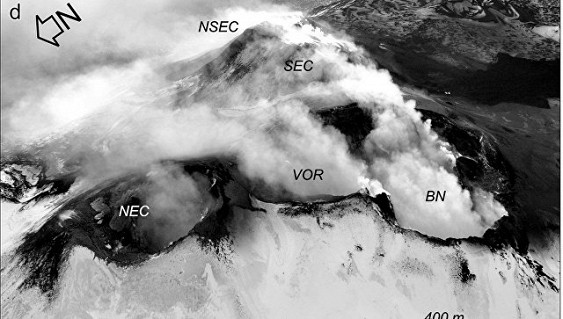 The volcano Etna in Italy is an unusual way to wander its slopes, and rarely stays in one place for the reason that matter on one of its slopes, unstable in nature and gradually falls to the ground.

The constant activity of Etna is a huge plus for us as it allows us to examine the different evolutionary processes in the life of the volcano, which at Etna last few years, and on other volcanoes, would go decades or centuries. Due to this, Etna is the most studied volcano on Earth, says Acocella Valerio (Valerio Acocella of the University Tre in Rome (Italy).

Despite the knowledge of Etna, a history that starts from Ancient Rome, by now could not explain why her mouth, unlike all the other relatively stable and ancient volcanoes, is constantly moving from one place to another.

Acocella and his colleagues have found an explanation for this unusual phenomenon, studying the traces and the history of the last six eruptions of Etna that occurred in 2007. At that time the main crater of Etna, as they say scientists, is the so-called South-East crater, emerged in 1971. In November 2007, during the last eruption, Etna once again moved and new outpourings of magma occurred South-East of this crater. The new crater was finally formed in 2011, a few meters from the old crater.

Observing this process with the help of GPS satellites, and geological excavations at the site, Acocella and his colleagues have built a map of the density and other properties of rocks surrounding both of these vents, and to find the reason for the move of the crater. It turned out that breed on the North-Western slope of mount Etna was unstable by nature, and, apparently, they gradually slid into the depths of the bowels of the Earth during the periods of activation of the volcano.

This process, suggested by the geologists, may be related to the fact that the frequency of eruptions of Etna has increased significantly during the second half of the 20th century. Moving the vents to a new location, according to Acocella and his team have increased the likelihood of more powerful and frequent eruptions than in the past, and further movement vents along the current trajectory of its migration will only reinforce them.

As scientists hope, compiled their maps of the movement of rocks under the mount Etna will help in the future to predict where and how often to move her mouth that will help you to assess the risk posed by the volcano to the population of Italy.