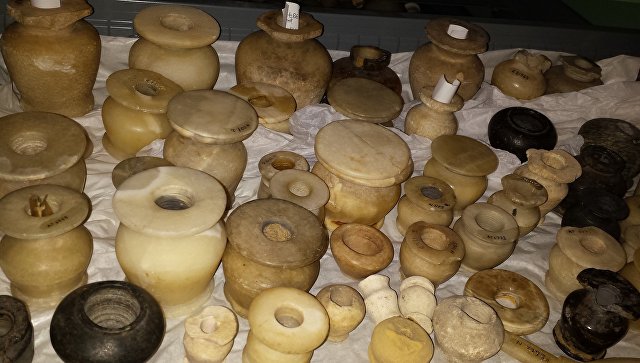 Scientists from France for the first time accurately measured the age of ancient Egyptian and ancient Greek cosmetics. It turned out that residents of the Nile Valley began to use synthetic lead white 3.5 thousand years ago, according to an article published in the journal Communications Chemistry.

“We proved that both the ancient Egyptians and Greeks had a good understanding of chemistry and could synthesize cosmetics containing white lead carbonate.It is interesting that initially the Egyptians used a natural white pigment, cerussite, and only after a thousand years they learned how to make it synthetic analogue, “write Violaine Jeammet of the Louvre Museum (France) and her colleagues.

Ancient Egyptians and many other peoples of the Earth of the times of antiquity used an extensive set of whitewash, shadows, paints and cosmetics to decorate their body. Some of them had an explicit ritual character, while others – for example, some types of toxic lead compounds – could be used to protect against or remove parasites from the body.

Scientists have long wondered when the Egyptians learned how to make these funds, how they did it and where they got the materials for their manufacture. Some such secrets have already been revealed. For example, physicists from France discovered eight years ago, enlightening white with a particle accelerator, that the Egyptians imported ingredients for their production from Afghanistan and used them for medical purposes.

As Zhamme and her colleagues note, further study of cosmetics and study of its role in the life of Egyptians and other peoples of ancient times was complicated by the fact that scientists could not understand when exactly these funds were manufactured.

The fact is that all these paints are made of various mineral components, for example, chromium or iron salts, whose molecules were formed long before they fell into the hands of Egyptian masters. In addition, they almost completely lack organic components, which would allow us to calculate their age by the fraction of carbon isotopes.

Jammeh and her colleagues found out that this is not always the case, studying the ancient Egyptian and Greek recipes for the production of two types of lead white: phosgene and cerussite, which have survived to the present day on papyrus scrolls. Chemists drew attention to the fact that air and wood ash were used in their production, the “traces” of which were to be preserved in white as carbonic acid molecules.

Scientists have checked whether this is really so, having studied the isotope composition of the ancient Egyptian cosmetics stored in the Louvre’s storehouses. In addition to the whitewash itself, it also contained other pigments – galena, “black lead”, as well as laurionite and anglesite, colorless-greenish lead compounds with chlorine and sulfuric acid.

Laurionite and phosgenite are extremely rare in nature and have long been considered by some scientists as the first products of the “chemical industry” of Ancient Egypt, while cerussite, galena and anglesite can be easily mined in any lead mine. Similar differences in origin, as scientists suggested, should have been reflected in their isotopic composition.

Checking their theories on ancient Greek cosmetics, as well as white and pink powder made for Queen Teil, the wife of the famous reformed king Amenhotep III, the scientists confirmed these calculations and revealed a very interesting and previously unknown fact from the history of Egypt.

It turned out that cerussite, the very first component of the Ancient Egyptian whites, was made from a natural version of this mineral, while phageenite from the Teie powder-box and cerussite analogs from the cosmetic arsenal of the ancient Greeks already had a synthetic origin.

In favor of this is the fact that the cosmetics of the times of Amenhotep III has a “correct” radiocarbon age, about 1600-1400 BC, and the earlier whites from cerussite were improbably ancient – their age exceeded 10 thousand years.

This means that the ancient Egyptian cosmetologists first learned how to make cosmetic products from “improvised” natural materials mined in lead mines. Only then, when they either dried up, or makeup became very popular, they figured out how it is possible to get white from other lead compounds, mixing them with soda and chlorine compounds.

In the near future chemists and restorers from the Louvre plan to use the same technique to calculate the age of many famous paintings that are exhibited in the museum or stored in its storerooms. As scientists hope, this will either confirm their authenticity, or reveal the fakes that have been hidden from us for several centuries.