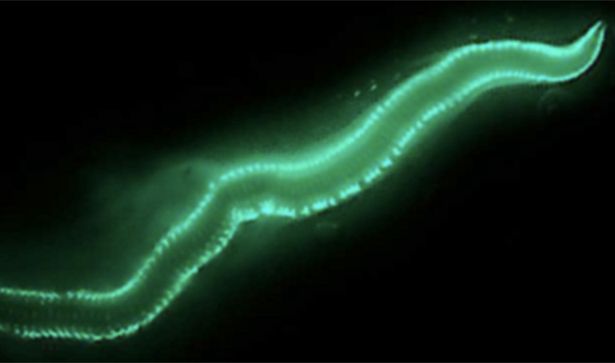 The mysterious green glow of worms that inhabit the bottom of the Atlantic in the vicinity of Bermuda turned out to be the product of a unique set of genes that has no analogues in the genomes of all other living creatures on Earth.

“Every summer and autumn, on the third night after the full moon, exactly 22 minutes after sunset, the females of these worms begin to glow and perform a complex dance, attracting the attention of the males.It might be thought that they have a watch that helps them not miss their performance on this landmark underwater show, “says Mercer Brugler of the City College of Technology in New York.

Many night and sea animals, for example, fireflies, jellyfish, devil fish and many other invertebrate inhabitants of the depths, as well as mushrooms, can glow green, blue or even red, producing bundles of light particles during complex chemical reactions.

In recent years, scientists have created several transgenic animal species in which the genome of the GFP jellyfish is built, which causes them to glow with green light, or similar genes of algae or fungi. This technique allows biologists to monitor how diseases spread throughout the body, and how different cells, organs, and genes work. On their basis, scientists have already managed to create “green” dogs, cats, mice, chickens and other animals.

These genes proved so important for science that the Nobel Prize in Chemistry was awarded for the opening of GFP in 2008. Today, scientists are actively looking for other variants of luminous proteins that can help us penetrate deeper into those areas of the body that can not be considered even in the most powerful microscope.

Brüggler and his colleagues have replenished the arsenal of colleagues with another similar gene, studying the structure of DNA and RNA of extremely unusual inhabitants of the bottom of the Atlantic, Bermudian fireworms (Odontosyllis enopla).

Their green-blue glow was one of the main mysteries of the Bermuda Triangle for nearly five centuries. If you believe the Spanish chronicles, the first to see him was Christopher Columbus and his team, sailing to the shores of the New World in the distant 1492. They noticed that mysterious lights, similar to the vibrating flame of a candle, “danced” on the ocean floor.

Only at the beginning of the 20th century naturalists realized that the sailors did not experience hallucinations, but watched the males and females Odontosyllis enopla choose partners for the continuation of the genus and throw out eggs and milk in the waters of the Atlantic.

Scientists have long been interested in the genes responsible for this glow, but their study was complicated by the inaccessibility of these worms and the fact that they glow only during “wedding nights” and for a very short time.

Brüggler and his colleagues solved this problem by going on an expedition to Bermuda, where they collected several mature females at the time of egg laying. Geneticists extracted cell samples from them and analyzed which genes were most active in them at the moment when worms started their “dance”.

As it turned out, Odontosyllis enopla were similar in this respect to fireflies and many other luminous animals using the enzyme luciferase for producing light. This substance interacts with another organic compound, luciferin, oxidizing it and producing photon beams.

Interestingly, luciferase of Bermuda worms has a unique structure, which has no analogs in the cells of any other living being capable of luminescence. This, according to scientists, significantly expands the arsenal of biologists – they now have the opportunity to create a whole class of new luminous labels that will be able to label different genes and proteins in the cells of humans and laboratory animals.