Scientists have unraveled the mystery of the wings of ladybirds 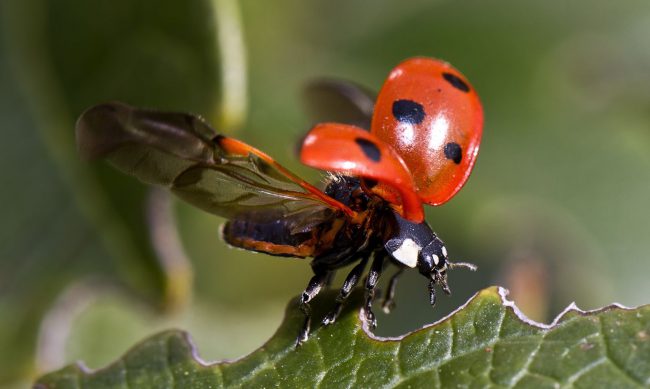 More than 4000 kinds of ladybirds are known in the world. These amazing beetles are called differently in different countries, but these names all combine their attitude to livestock. The Serbs – this is a sheep lamb, and in France and at all – the Godfather. The scientist for many years has been haunted by the way a ladybird manages to hide its wings under its bright shell, because their range is much larger than the size of an insect’s calf. And, finally, Japanese researchers unraveled the mystery that tormented them.

Of course, scientists used to know that the wings of the ladybug are folded several times, like a figurine of origami. However, exactly how she manages to carry out this process – science was completely incomprehensible. The mechanism of folding and unfolding the wings of this insect works so quickly and clearly that the principle of its operation would be very useful to scientists in creating, for example, innovative robots, satellites or medical devices. After lengthy research, the staff of the University of Tokyo, under the leadership of Professor Kazuya Saito, managed to understand the principle of the work of the wings of the ladybug.

For this, the scientists went to a very unusual step. It was decided to create artificial wings for the ladybug, transplant them to her, and then use computer tomography to understand how this mechanism works. The artificial analog of such wings in the laboratory was not so easy to make. After numerous experiments they succeeded. Wings were created from a special gel, hardening under the influence of ultraviolet. These implants have allowed Japanese researchers to unravel the mystery of an insect.

As it turned out, the whole secret is that the unfolding and folding of the ladybird’s wing is based on hydraulics. The wing is permeated with vessels, some of which go along its edge. In the folded form, the vessels are pinched, so they accumulate elastic energy, instantly unfolding the wing, as soon as the dorsal shell is opened. The wings do not contain any joints or articulations, which surprised scientists a lot.

Having borrowed this technology from ladybirds, scientists can bring a lot of new to aviation and cosmonautics, and, not without irony, say that the classic mechanism of umbrellas should be renewed a little. The results of their research Japanese published in the American journal PNAS.