Scientists link solar variability to the start of La Niña 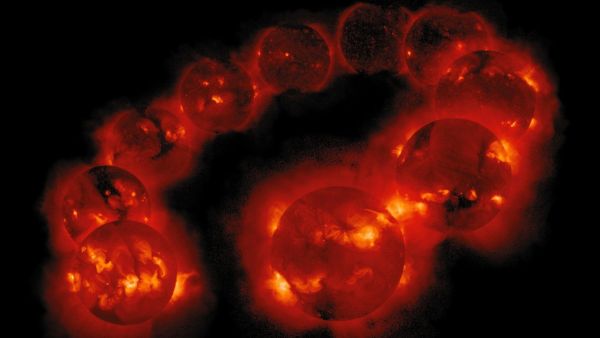 A new study shows a correlation between the end of solar cycles and the transition from El Niño conditions to La Niña conditions in the Pacific Ocean, suggesting that solar variability may influence the seasonal variability of weather on Earth.

If the link, outlined in the journal Earth and Space Science, is confirmed, it could significantly improve the predictability of the largest El Niño and La Niña events, which have a number of seasonal climatic effects on land. For example, the southern United States tends to be warmer and drier during La Niña, while the northern United States is colder and wetter.

“Energy from the sun is the primary engine of our entire earth system and makes life possible on earth,” said Scott McIntosh, a scientist at the National Center for Atmospheric Research (NCAR) and co-author of the paper. “Even so, the scientific community does not understand what role solar variability plays in the impact of weather and climate events on Earth. The study shows that there is reason to believe that this is indeed the case, and why this connection may have been overlooked in the past. ”

The appearance (and disappearance) of sunspots – superficially visible signs of solar variability – have been observed by humans for hundreds of years. The increase and decrease in the number of sunspots occurs over approximately 11-year cycles, but they do not have a clear beginning and end. Due to the vagueness of the length of any particular cycle, it is difficult for scientists to match the 11-year cycle with the changes taking place on Earth.

For the new study, scientists are relying on a more accurate 22-year solar “clock” derived from the Sun’s magnetic polarity cycle, which they have identified as a more regular alternative to the 11-year solar cycle in several recently published studies.

According to their recent research, the 22-year cycle begins when oppositely charged magnetic stripes surrounding the Sun appear near the star’s polar latitudes. Over the course of the cycle, these stripes move towards the equator, causing sunspots to appear as they travel through mid-latitudes. The cycle ends when the stripes meet in the middle, mutually annihilating each other in what the research team calls a terminator event. These limiters serve as precise guidelines for the end of one cycle and the beginning of the next.

“We are not the first scientists to study how the variability of solar activity can lead to changes in the Earth system,” said Limon. “But we are the first to use the 22-year sundial. The result – five consecutive terminators lining up with a switch in the El Niño wobble – hardly a coincidence. ”

In fact, the researchers ran a series of statistical analyzes to determine the likelihood that the correlation was just a fluke. They found that there was only a 1 in 5,000 chance or less (depending on the statistical test) that all five terminator events included in the study randomly coincide with ocean temperature changes. Now that the sixth terminator event – and the corresponding start of a new solar cycle in 2020 – also coincides with the La Niña event, the likelihood of an accidental occurrence is even lower, according to the authors.

The article does not address what physical connection between the Sun and Earth might be causing the correlation, but the authors note that there are several possibilities for further investigation, including the effect of the Sun’s magnetic field on the amount of cosmic rays that escape into the Solar System and eventually bombard The earth. But a reliable physical link between variations in cosmic rays and climate has yet to be determined.

“If further research can establish that there is a physical connection and that changes in the Sun are indeed causing variability in the oceans, then we can improve our ability to predict El Niño and La Niña events,” McIntosh said.