Scientists made the mouse completely invisible and transparent 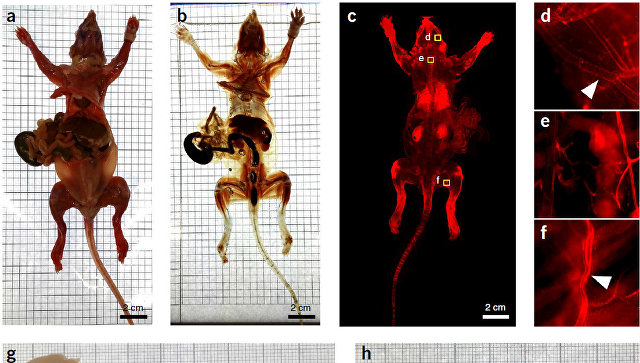 Over the last few years biologists and biochemists have developed some fantastic technologies to make transparent tissue of the brain or the entire nervous system in General that allows you to monitor how you communicate with each other neurons and where they are connected. Such methods bleaching of living tissue is critical for understanding how our brains and other complex body parts.

It tells Chenchen pan (Pan chenchen’s) from the University of Munich (Germany), all these methods have two disadvantages. They either require the removal of brain or other organ from the body before it is made transparent, or they do not allow the use of different fluorescent markers and dyes, which researchers injected into the body of the studied animal during his lifetime to mark interesting parts of the nervous system or other organ.

All this deprives of the sense of such techniques, since these problems do not allow to fully study the structure of the discolored bodies and understand how they interact with other parts of the body.

Pan and his colleagues were able to overcome both of these problems, improving the work of one of these technologies is the 3DISCO technique developed by part of the authors in 2012. Its weakness is that in the preparation of the drugs all the glowing and colored molecules are introduced into the body, irreversibly destroyed.

This technology and its upgraded version which is pan and his colleagues called uDISCO, relatively simple discoloration of brain or the entire body of the animal can be accomplished in just 45 minutes or a few hours, and this will require a total of three reagent – special alcohol, tert-butanol, a mixture of compounds of the benzene and alcohols under the name of BABB, and diphenyl ether with small amounts of vitamin E.

The last substance is a key component in the methodology uDISCO – it does not allow the spirits to destroy the fluorescent substance introduced in the body, scientists decolorize or encountered it in a natural way after transplantation of the respective genes in DNA prepareimage animal. Pan and his colleagues have selected a few combinations of ether and the mixture BABB, a portion of which is configured for protection of fluorescent substances, and others – to increase the transparency of the fabric.

As a demonstration of what uDISCO work, the authors prepared several samples of completely transparent and illuminated preparations of the brain of rats and mice, including those connected to the spinal cord. In addition, they discolor several whole mice, touch up their nerve tissue with AAV virus, embedded in their neurons, the GFP gene that made them glow green. As I hope the authors, their development will accelerate the study of the mysteries of the brain and other complex parts of the body, and thus will reduce the number of mice and other experimental animals, which have to sedate to conduct such experiments.