Scientists read ancient letters for the first time without unfolding them 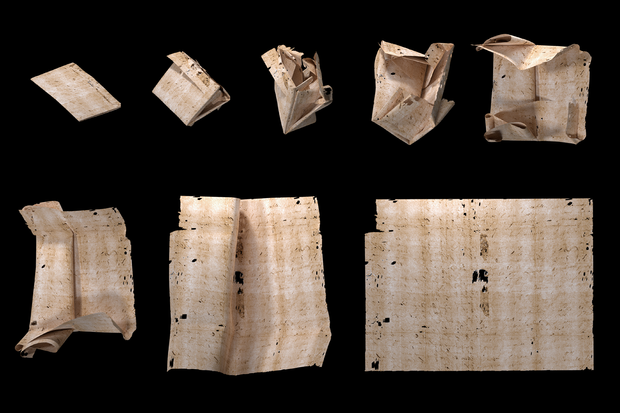 Micro X-ray tomography allowed scientists to read sealed Renaissance letters for the first time without opening them or damaging them in any way. The research results are published in the journal Nature Communications.

Before the advent of envelopes, the confidentiality of postal items was ensured with the help of wax seals and complex folding of the letter itself, which could only be opened by tearing it.

The Dutch Postal Museum in The Hague houses an unusual 17th century exhibit – Brienne’s Chest, which contains 2,600 unopened letters. The chest belonged to one of the most active postmasters of the time, Simon de Brienne. From 1680 to 1706, he collected letters that came to The Hague from all over Europe, but for some reason never reached their addressees.

In fact, this is a unique archive that stores a description of the life and customs of the Renaissance. But, unfortunately for historians, until now it has been inaccessible for study.

Scientists from the USA, Great Britain and the Netherlands have proposed a way to find out the content of ancient letters without opening them. The authors scanned some of the sealed manuscripts and then virtually unrolled them. For scanning, they used an X-ray scanner originally developed for dentistry.

“We designed our X-ray scanner to have unprecedented sensitivity for mapping the mineral composition of teeth, which is invaluable in dental research. But its high sensitivity also made it possible to detect ink marks on paper. It’s incredible that a scanner designed for dental research has gone this far. , – cited in a press release from Queen Mary University of London, where the device was created, the words of one of the authors of the study, Dr. Graham Davis (Graham Davis).

The mail packets were first scanned and 3D reconstructed, and then a specially designed computer program identified and separated the layers of the folded letter. After that, scientists were able to start analyzing the texts themselves – documents of the era.

For example, one of the letters, dated July 31, 1697, contains a request by Jacques Sennac to his cousin Pierre Le Per, a French merchant in The Hague, to certify a copy of the death notice of a certain Daniel Le Per.

The virtual unfolding algorithm allowed authors not only to read unopened letters, but also to recreate the step-by-step process of folding a letter – to reveal the secret of one of the ancient ways of protecting information.