Recently we wrote about how quantum entanglement can mean that the future can influence the past. Now a group of Dutch scientists was able to create it deliberately. About what it means for science and the world as a whole – read on.

In a report published in the journal Nature, the team led by the scientific director of QuTech Ronald Hanson describes how their new achievement potentially in the future can be widely used, including in the Internet that can not be hacked, as it will be protected by a quantum cipher.

What is quantum entanglement

Quantum entanglement is one of the most inexplicable and complex things known to physics. Albert Einstein called this phenomenon “an eerie action at a distance”, but modern quantum physics has managed to prove that it is real. 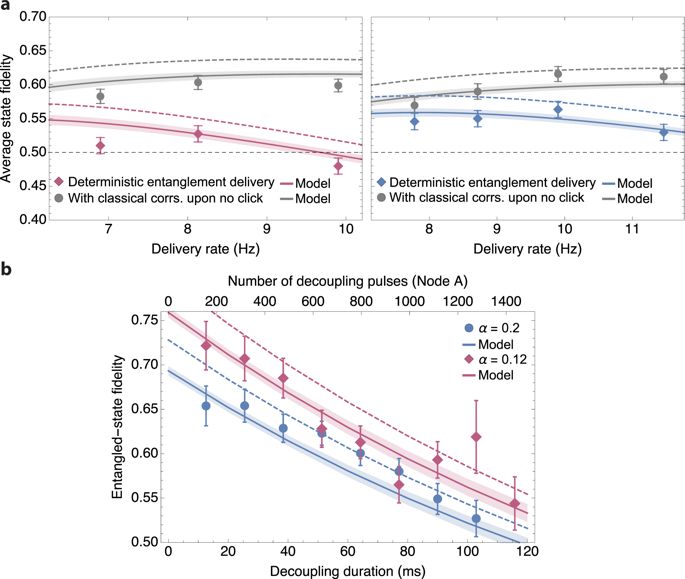 Comparison of the experimental model and data / Ronald Hanson / Nature

Entanglement arises when very small particles become so connected with each other that any effect on one of them affects the other, even if they are separated by huge values ​​of space-time. When researchers measure the state of a single particle, they can determine the state of its partner, and not study it separately.

But what makes quantum mechanics so overwhelming that even Einstein could not accept it? The fact is that quantum particles are always in a state of uncertainty – until they are measured.

Following this notion, any such particle can rotate clockwise or counterclockwise, like a notorious Schrodinger cat, until it is measured and it “decides” which way to turn. In quantum entanglement, when one particle “decides” to rotate clockwise, it becomes known to us that another particle rotates against it.

Researchers of the XXI century could not only prove that Einstein was wrong, but also made a serious breakthrough in the strange science of quantum entanglement. One of them is the achievement of the Delft scientists. In 2015, Hanson and his team demonstrated the reality of the “scary action”, creating a quantum entanglement between two photons at a distance of 1.3 kilometers.

Here’s how this method works. The researchers used diamond crystals with an electron in a state of uncertainty, that is, the electrons were directed upward and downward. Then they guided a laser beam onto the electrons, which caused them to emit a photon-a particle of light-which entered the state of entanglement with the electron. When scientists combined all the photons, both electrons became entangled with each other. Photons came together in one wave, which eventually led to quantum entanglement.

Unfortunately, due to external noise, entanglement quickly degraded – literally in a split second. Continuing work on this method, Hanson’s team managed to develop a more stable way, which allowed them to intentionally generate confusion.

The researchers used an assembly line equipped with intelligent systems of checks and balances that enabled them to make sure that everything was ready for the experiment. According to the co-author of the study, Peter Humphries, as a result, they got the system thousands of times faster than the previous method.

“Like the modern Internet, where people are constantly wanting to be online, the system must be confusing for every demand,” Hanson says.

On this assembly line, they made a thousand attempts of entanglement before they succeeded. Further, scientists protected the state of entanglement from degradation by microwave pulses until the moment of ejection, which took place every tenth of a second.

Using this method, the team was able to generate 39 quantum entanglements, with the decay occurring only five times per second. Scientists believe that combining this result with one of the past experiments in which they managed to protect the state of entanglement while generating new cohesion will allow the construction of a quantum computer network with more than two connections.

“In 2020, we want to connect four cities in the Netherlands by quantum entanglement,” Hanson says. “It will be the very first quantum Internet in the world.”