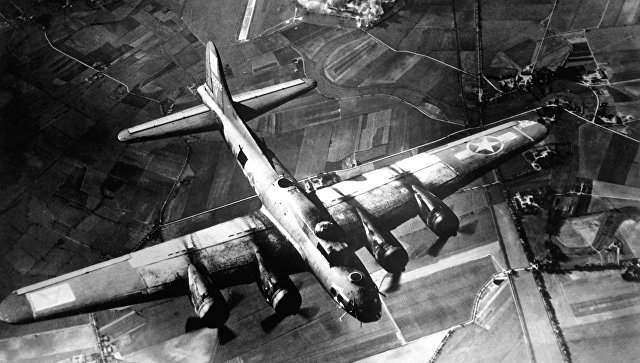 The mysterious anomalies that periodically appeared in the radio air of Britain in 1943-1945 turned out to be a kind of echo of the mass bombings of German cities by Allied aviation. This is written by physicists who published an article in the journal Annales Geophysicae.

“It’s amazing how the vibrations generated by anthropogenic explosions can reach the boundary of the cosmos.Every allies raided about the same amount of energy as three hundred lightnings.The horrific power of these blows helped us evaluate how events on the surface of the Earth can affect the far corners of its atmosphere “, Says Christopher Scott of the University of Reading in Great Britain.

As scientists explain, any large-scale events in the bowels of the planet generate a mass of deep and fairly powerful infrasonic waves, the traces of which can often reach the upper layers of the atmosphere and significantly change the air pressure or the distribution and density of electrons in the ionosphere.

For example, the analysis of data collected by GRACE gravimetric and climate satellites in March 2011 showed that they managed to record traces of similar sound waves generated by the famous nine-point earthquake off the eastern coast of Japan, which led to the tsunami and the disaster at the Fukushima nuclear power plant.

Scott and his colleague Patrick Major discovered another very interesting example of how events on the surface of the Earth affect the life of the ionosphere when they studied anomalies in the air, recorded by British military radio stations and radio amateurs in 1943-1945.

Studying the data collected by the Radio Wave Study Center in Slo (Britain) during the war years, Major and Scott drew attention to an unusual pattern. Anomalies appeared about the same time when armies of British “Lancaster” and American “Superfortresses” bombed Berlin, Essen, Dusseldorf, Cologne and other industrial centers of Nazi Germany.

This prompted scientists to believe that carpet bombing could generate quite strong infrasonic waves that changed the nature of the distribution of electrons, as well as the speed of their movement, and gave birth to these mysterious hindrances.

They tested this theory by calculating the strength of the acoustic waves generated by British and American aerial bombs, and estimating the typical amount of energy released into the atmosphere due to the explosions of these projectiles.

Calculations showed that even relatively modest raids by the Allies, during which less than 200 tons of bombs fell on German cities, caused rather strong fluctuations, which warmed the ionosphere and accelerated the movement of electrons. This caused interference that could be heard on the radio even from a distance of a thousand kilometers separating Britain from the western regions of Germany.

Why did nothing of the sort happen in the first years of the war, when Germany was bombing? According to Scott and Major, this is due to the fact that the Nazi troops did not use powerful bombs, and preferred to shell Britain with the V-1 and V-2 rockets with a relatively weak warhead.