Scientists said that the most dangerous product is potatoes 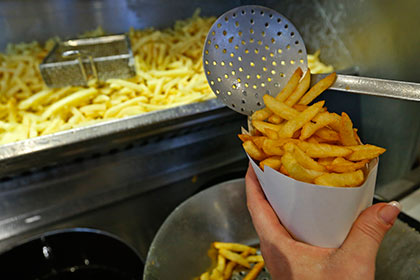 Excessive consumption of potato dishes (such as mashed potatoes and french fries) may be associated with high blood pressure. Dedicated to this research physicians from the US and Australia, published in the journal The BMJ.

Those who drank four or more servings of boiled and fried potatoes in a week, the risk of developing hypertension was higher than those who ate less than one serving per month. This relationship is found in women, but not men. Abuse of French fries and potato chips resulted in hypertension in men and women. The reason for the observed dependence of the authors consider a high glycemic index of potatoes, which leads to a sharp rise in blood sugar levels. Meanwhile, not all scientists agree with the theory of the glycemic index. In its work, the doctors observed the 187 thousand men and women. These individuals participated in three major studies conducted in the last 20 years in the United States. With the help of a questionnaire, scientists have found dietary preferences of Americans, and their health status (presence of hypertension) are fixed by a medical examination. Scientists believe that replacing one serving dishes with boiled or baked potatoes, and mashed potatoes, one containing no starch product can reduce the risk of developing hypertension. Meanwhile, physicians noted that the selection of the diet should not come from a single product, and their complex. Despite the fact that many potato starch, it is rich in potassium useful for the organism.