Scientists squeezed and “stopped” the light 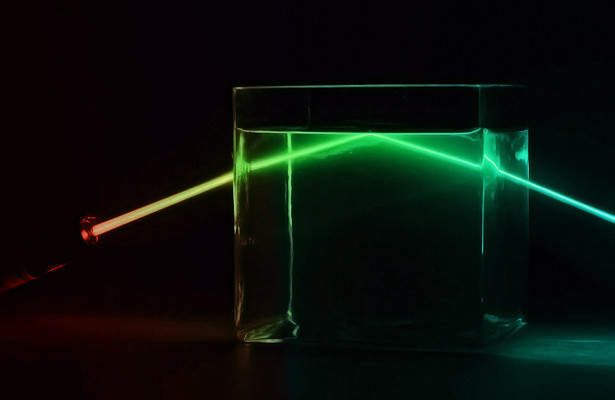 A Russian scientist, as part of an international group, summarized past experience in a controlled change in the speed and spectrum of a light signal. Their work was published in Nature Photonics and will help in the creation of fully optical routers for high-speed data transfer.

The problem of how to switch the light signal to another frequency channel or stop it for a while without conversion to electronic format has long occupied researchers. Previously, scientists showed that getting into the resonator light signal can change the frequency – its color. The effect is called a “direct transition.” If the optical signal passes through the boundary of two media, it changes the wavelength. When the boundary between the two media moves, then both the wavelength and its frequency can change with the passage of light. In this case, the light makes an indirect transition.

“In ordinary media, the speed of propagation of light energy is independent of frequency. In optical waveguides and special media, the situation can be much more complicated – the propagation speed also changes with frequency. Imagine that the signal should reflect off the boundary, but due to a change in frequency and, accordingly, speed, light cannot move away from it, ”explains co-author of the study, Professor Alexander Petrov.

The head of the laboratory of modern photonic materials and technologies at ITMO University together with colleagues from the Technical University of Hamburg, the University of Minufiya, the Helmholtz Center in Histachta and the University of Yokohama set out to summarize the experience of previous generations and show how a small change in the refractive index can be used to effectively control light, including to compress and stop it. Using this effect, it is possible even under certain conditions to catch and compress the light signal.

“The light in this case is like a surfer on a wave. The surfer directs his speed so as not to lose the wave, and, continuously rolling down the slope, uses the received energy to compensate for the force of friction against water. In the case of light, the correctly selected dispersion relation also allows the light to catch the wave and, as it were, on the slope of the front, receive energy. Since there is no friction of light, additional energy is used to increase the frequency, ”Petrov notes.

There are many applications for these effects, scientists say. First of all, an increase in the data transfer rate. This will be possible thanks to the creation of a fully optical router that would work on this principle.