Scientists surprised by the behavior of an elephant in India 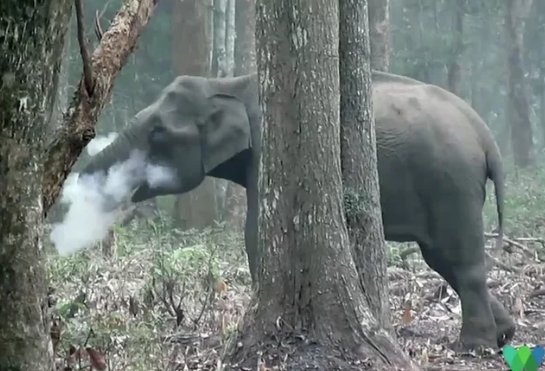 Employees of the Indian Society for the Protection of Wildlife recorded on video elephant, which emits from the mouth of something like smoke. According to scientists, on the shots the animal tries to eat charcoal, blowing ash from it.

The elephant-“smoker” managed to be shot on video in Nagarakhol National Park. The elephant hit the lens of hidden cameras placed in the forest to study the life of tigers.

The elephant stood on one of the strips, which are burned in the forest to prevent the spread of the flame in the event of a fire.

The use of coal in food by animals is a phenomenon that scientists have known for a long time. So it is known that colobus often eat coal in order to neutralize toxins in food.

So researchers reported in 1997 that the Zanzibar red colobus are the only primates in addition to humans who deliberately eat coal. Scientists believe that coal helps monkeys to deal with the harmful effects of phenolic compounds found in plant leaves eaten by them.