Scientists told about the fate of Hawaiian snow 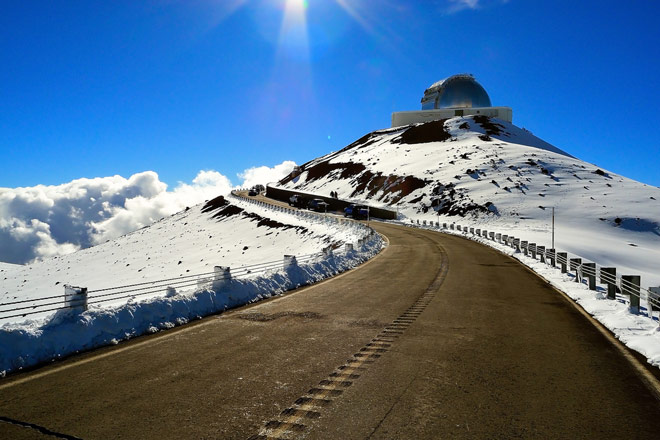 Dreams of a tropical paradise in Hawaii rarely include snow, but every year a white blanket covers the tops of the staff for at least a few days. Systematic observations of snowfalls and snow cover on Mauna Kea and Mauna Loa were practically not carried out, however, the results of a new study show that on two volcanic peaks the snow lies on average not less than 20 days each winter, and by the end of the century the snow cover is almost Completely disappear.

A group of climatologists led by Chunxi Zhang from the International Pacific Research Center (IPRC) at the University of Hawaii in Manoa used satellite imagery to quantify the latest snow cover distributions. Scientists have developed a regional climate model to obtain a general idea of ​​the current Hawaiian snowfalls, and then to predict future ones.

To assess the current situation, Zhang and his colleagues studied the data on the surface composition obtained from satellite imagery of the island from 2000 to 2015 to build a daily snow cover index. They used this compilation of data to assess the quality of their regional atmospheric climate model, based on global climate forecasts that included several scenarios for the expected climate change. Then, Zhang made a model that reproduced the end of the 21st century, assuming moderate greenhouse gas emissions in the usual scenario of human development to determine how long Hawaii could enjoy its rare glimpses of the white mountains.

“We learned that Hawaiian snow has an aesthetic and recreational value, as well as cultural significance for residents and visitors of the island, and decided to find out how climate change will affect tropical snowfalls in the future,” Zhang explained.

Unfortunately, the forecasts show that there will come a time when the amount of snow during the winter will be ten times less than the current one. In fact, all snow will disappear.

The received data did not become a complete surprise. It is assumed that even with moderate climate warming, air temperature at higher altitudes increases more than at sea level, and that on average fewer winter storm systems will affect the state.

The study also illustrates the benefits of the recent downward trend in the model, identifying regional and local impacts of global climate change.