Scientists told why geese do not freeze in winter 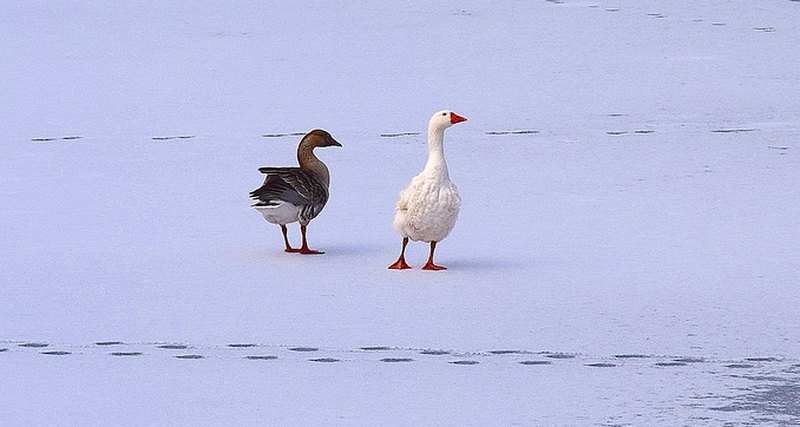 Geese calmly survives the northern winters and do not fly far to the south due to the ability to slow down the heartbeat and metabolism, as well as reduce body temperature in the coldest, scientists found.

Geese can safely winter in the territory of northern countries and not fly far to the south due to the ability to slow heartbeat and metabolism, as well as reduce body temperature in the coldest seasons, scientists found.

“Many animals that do not hibernate, such as red deer or alpine ibex, slow down metabolism and lower body temperature in order to survive the lack of heat and food during the winter. Our research shows that some birds, such as gray geese, use similar survival strategies, “says Claudia Wascher from the University of Vienna.

Birds, like mammals, are warm-blooded creatures – they maintain a constant body temperature, burning nutrients, which allows them to remain active and survive even at low enough temperatures. This “superpower” has limitations – when air temperatures become very low, the body of birds can not compensate for the loss of heat, and the birds have to migrate to the south.

Similar problems, as observations of the life of some mammals and birds show, sometimes do not interfere with animals – they either do not go to hibernation at all, or they use fundamentally different survival strategies. For example, northern geese usually migrate to short distances from nesting places, flying to those regions of Russia, Canada and northern European countries, where average temperatures in the winter reach about 5 degrees below zero.

WAWER and her colleagues tried to uncover the secrets of the survival of these birds, watching the life of a large flock of two hundred ordinary gray geese (Anser anser), living in a nursery university near the town of Grünau in central Austria. Scientists caught dozens of birds and attached special sensors to their bodies that collected data on their body temperature, heart rate and other physiological parameters for 1.5 years.

According to biologists, these birds had no problems with access to food, as they were constantly fed by nursery staff, but they were forced to live in the open air and carry Alpine frosts. Changes in their physiological state, as the scientists had hoped, had to reveal the secrets of their survival in such conditions.

As these observations have shown, birds survive winters due to the simple trick that many mammals have mastered – they reduce their metabolic rate, heart rate and body temperature, which allows them to spend less energy on heating the body.

For example, in December and January, the rate of metabolism in geese decreased by about 22% compared to the summer months, and their body temperature fell by about a degree Celsius.

In a similar state, geese become more vulnerable to predator attacks, however predators are forced to live in similar conditions, which equates their chances of survival. According to biologists, other birds, rarely migrating to the south, can use similar methods for wintering in temperate and circumpolar latitudes.