Scientists were able to “cut” schrödinger’s cat into two halves 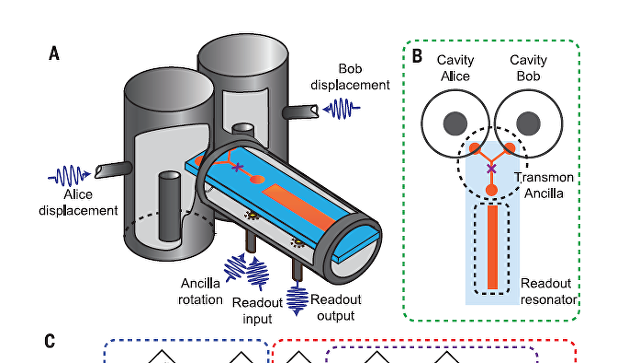 Physics from Yale brought a new “breed” of schrödinger’s cat, cut it in half – it can not only be both dead and alive, but also to be in two different points, according to a paper published in the journal Science.

Schrodinger’s cat — “party” thought experiment, which was proposed by the Austrian physicist Erwin schrödinger in 1935. During it in a sealed box placed cat and the mechanism to open the container of poison in case of disintegration of a radioactive atom (that may happen or not happen).

In accordance with the principles of quantum physics the cat is both alive and dead. From here originates the term “quantum superposition” – the set of all States in which you can have a cat. Today, physicists are actively trying to create such a schrödinger’s cat, which could be seen with the naked eye.

Robert Schoelkopf (Robert Schoelkopf of Yale University (USA) and his colleagues “grew” an improved model of such a quantum of “animal” by learning to separate the schrödinger’s cat on a separate, but, nevertheless, depend on each other.

“The box” for their cat is a special two microwave resonator, in which the conditions are such that photons, particles of light, can exist only at certain wavelengths. These resonators are connected together using a closed superconductor which acts as an artificial atom.

If these cameras can run multiple photons “entangled” with each other on a quantum level, then the whole structure turns into a single Schrodinger’s cat, is divided into two parts – what happens to the photons in one of resonators, will affect the fate of particles in the second chamber.

Interestingly, the existence of “cat” can be found only if you open both the “box” — otherwise, the observer will see a set not connected to each other photons.

Using this “cage”, the physicists were able to create extremely large schrödinger cats consisting of a total of more than 80 photons. It brings us closer to the realization of a macroscopic version of the experiment, in which we would be able to see “cat” to the naked eye. With its help, physics will be able to understand why we don’t see manifestations of the “weirdness” of quantum mechanics in everyday life.

According to Schoelkopf, their “cat” in the first place will be of interest to physicists involved in the development of quantum computers, since his cell is both a cell of the quantum memory until the record operation, and a device for error correction in quantum computing.