Scientists will resurrect the wingless gagarku 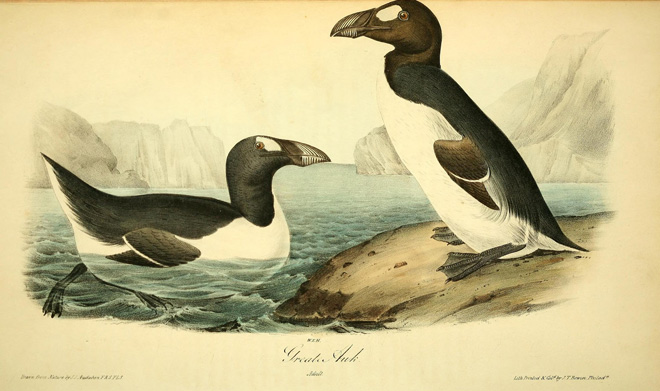 Scientists are planning to resurrect wingless gabbark. The reason for the disappearance of flightless birds is uncontrolled hunting. Wingless auric attracted hunters warm with down and delicious meat. It was also used as bait.

Defenseless birds disappeared forever from the face of the earth in the middle of the XIX century. The exact date of the last meeting of a man with a wingless aura remains controversial. According to one version, the last representative of the species was seen – and shot – by the Icelandic island of Eldye in 1844. On the other – in 1852 on the Great Newfoundland Bank.

Anyway, the winged razor stopped its existence in the XIX century, becoming the first bird in Europe and America, destroyed by man.

The bird was about the size of an average penguin – from 75 to 85 cm. The weight of a wingless auburn was about 5 kg. The bird’s head was decorated with a large hooked beak. The back was black, and all other parts of the body were white.

Scientists plan to get the DNA of a wingless razor from surviving scarecrows and canned bird organs. Then the macromolecule will be hooked into the egg of the auk. The experiment will be held in the center of “Rivayv & Restor”.

Winged loon occupied an important place in the ecosystem of the north of the Atlantic. Returning birds from the dead will improve the ecological state of the northern seas, which wash Europe and the eastern coast of the United States and Canada.

This species of non-flying birds was familiar to man over 100 thousand years. For many Indian tribes, the wingless auk was not only a food source, but also a symbol. With the remains of flightless birds, the dead were buried, and their cloaks were decorated with raincoats.