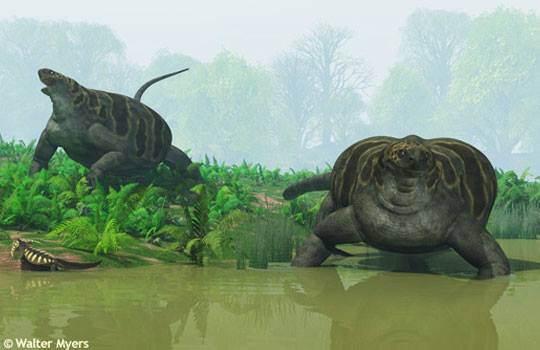 Distant relatives of mammals, monstrous kasidy were aquatic animals, something reminiscent of the sea cows of our world. Yet more unites them with the mammals the way of breathing, actively using the diaphragm.

This is the opening of the European paleontologists means that the breath of modern type arose from a common ancestor caseid and mammals, approximately 50 million years earlier than was assumed so far

Evolution has spawned a rather strange animal, for example – caseid – said the zoologist of the University of Bonn Markus Lambertz (Markus Lambertz), devoted to these strange creatures their new study.

Caseid (Caseidae) were a group of Paleozoic lizards pelycosaurs, who lived in the Perm period and reaching sizes of several meters weighing several tons. Their barrel-shaped torso is attached to a small head and short limbs. After the opening of the group in 1910, paleontologists decided that kasidy were ecological equivalents of modern cows waddled wandering in the meadows of the Permian period.
A separate issue has always been the way of breathing caseid. Their powerful joints and joint severely limited the mobility of the thorax, and, consequently, the volume of air available for breathing. However, the calculations showed that for quietly grazing herbivorous creatures that is enough. But over time, the issues appeared again.

Lamberta colleague at the University, Dr. Kristen Shelton (Christen Shelton) made a startling discovery that changed our view of caseid. I was very surprised by the structure of their bones. They all, even the young, was porous, like the old man, – said the researcher. Because whales exhibit exactly the same architecture of osteoporotic bone type, as described by Shelton, the conclusion suggests itself – caseey were water dwellers.

Suddenly made sense barrel-shaped torso with short neck and oslobodenie limbs used for swimming, – said Lambert, according to which the Caseidae were a sort of sea cows Paleozoic. However, this hypothesis brings us back to question of breath – for the animals, from time to time diving for food under water, the need for effective and well-developed respiratory system.
It should be noted that, for example, people are able to inhale about three quarters of the total volume of your lungs. Whales, the situation is quite close to ours, but caseid, according to previous reconstructions, the inhalation volume should not exceed half the volume of the lungs. But this is not enough for active swimming and periodic dives. How they managed to lead an aquatic way of life with this body structure?

In General, vertebrates have many adaptations for deep breathing. However, the presence of them all, with the exception of the diaphragm, have been consistently rejected by the researchers. And although the hope of finding a petrified diaphragm paleontologists no other explanation aquatic life caseid pick up is not possible. An additional argument in favor of her presence close relationship Caseidae in mammals.

Thus the researchers came to the conclusion that the diaphragm appeared in the common ancestor of caseid and mammals that lived over 300 million years ago – that is, this body for 50 million years earlier than expected. By the way, an efficient respiratory system is closely linked with the evolution of teplokrovnosti. We still do not know much about these animals. It was a long way to mammals, and the appearance of the diaphragm was at this turning point, summed up Dr. Lambert.