Secrets of the dolphins 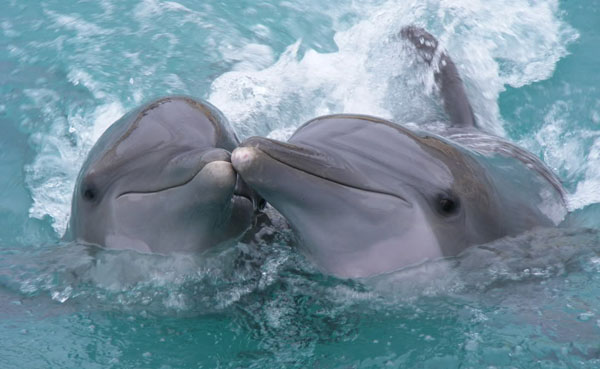 For several decades scientists are trying to understand exactly how the way the brain of a Dolphin. Capable of learning, have their own social skills and clearly understand the behavior of individuals, these mammals if they came from another planet — they are so different from the other representatives of the animal world.

Over the last fifty million years, the brains of dolphins have evolved to unprecedented size. One of the latest published research, sponsored by marine biologist Lori Marino has claimed that dolphins and whales have gone the opposite of evolution, returning from the land to the ocean depths. Here are a few facts that fully confirm these bold conclusions.

Sleep deprivation is killing any living creature — as surely as a gunshot wound. Only twelve days without rest shortage of highly organized brain to turn off main functions. But the dolphins have learned to cheat the system: these amazing mammals can disable, if desired, half of the brain, so that she could rest.

Dolphins are the only creatures in the world (besides humans, of course) with its own language. They communicate using a complicated combination of clicks and sounds. Moreover, the language of dolphins is quite complicated in order to precisely coordinate the behavior of the pack. Researchers estimate the Dolphin lingusamy usual 8 thousand “words” for the average person, he is only 14 thousand, despite the fact that in ordinary life is only about 1-2 thousand words.

Scientists have found that dolphins have the beginnings of logical thinking. This is the highest form of reason, which no one expect to find in mammals. The dolphins were able to solve a variety of challenging puzzles, find answers to complex questions and even to adjust their behavior depending on new circumstances, the specified person.

The brain of an adult Dolphin weighs more than the human brain — 1700 and 1400 grams respectively. In addition, dolphins in the cerebral cortex is two times more brains than us.

Recent data obtained by scientists and in fact can signal the presence of dolphins is a serious social structure. They possess not only self-aware (it can boast and some other animals), but also social consciousness, practiced together with emotional empathy.

The total number of nerve cells in the Dolphin higher than in humans. This is partly due to the ability of mammals to echolocation: they literally see with their ears. Located on the head of the acoustic lens focuses the ultrasound which Dolphin “feels” underwater objects, defining their shape.

Another striking feature of the brain of a Dolphin was the ability to sense magnetic poles. Dolphins and whales found in the brain special magnetic crystals that help these mammals navigate the oceans of the world. This same feature can explain the reasons why the whales are thrown ashore: guided readings of their GPS, they simply do not notice.