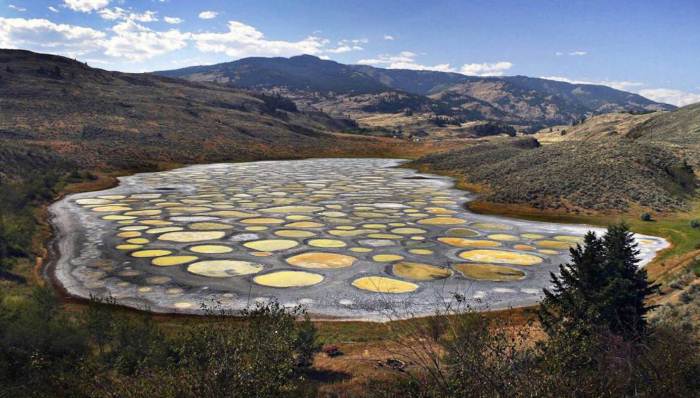 In Canada, in the province of British Columbia, there is a small lake Spotted Lake (Spotted Lake). Its uniqueness lies in the fact that the water contains the largest number of different minerals in the world. Magnesium, calcium, sodium, silver and titanium sulphate – all these minerals can be found in the lake water. It does not fish, does not grow algae. Only some microorganisms live here. The water in this lake has an incredible therapeutic effect, but you can not drink it.

On hot summer days, the water in the lake evaporates, and on its surface unusual spots form which change their color depending on the weather conditions. It can be said that in the lake islands of minerals are formed, having a strong crust that can withstand the weight of a person.

Like almost everything amazing in the world, the lake has its own legends. In this locality the Indian tribe are okanaghan. In the language of the tribe, the name of the lake sounds like Kliluk.

Indians believe that the lake was created by higher forces, so the water in it is curative. There is an ancient belief that the lake helped stop a long war between tribes. During the decisive clash, the enemies had to cross the lake. Imagine their surprise when, during the crossing, the wounds inflicted on the soldiers were healed. This event led the warring parties to the idea that if the wounds so easily heal, then there is no reason to apply them. And the war was over.

Over time, everything changed. The lands around the lake no longer belonged to the Indian tribes. For 40 years, they owned Ernest Smith. In 1979, he decided to organize a spa resort on the lake. But the lake is considered sacred to the Indians, so they decided to redeem it to keep it intact. And they succeeded. In late 2001, a deal was concluded between the Indians and Smith, as a result of which 22 hectares of land adjoining the lake became the property of an Indian tribe.

Tourists are no longer allowed to approach the lake. Permission to visit can be obtained from the elders of the tribe, and they give it very rarely.