Secrets of the Sacsayhuaman Fortress in Peru

According to official versions, which state agencies tell us, this fortress is designed to protect. But in fact, it does not protect anything, just a small hill, behind which a cliff in Cuzco. Perhaps for the current technology this hill has some strategic importance, but at that time, there was no such technology, so this wall (fortress) had no sense whatsoever in constructing it for protection.

Secondly, from the flanks, this “fortress” is absolutely not protected, and just along the flanks are convenient passageways towards Cusco along the lowlands. And thirdly, the famous jagged form of walls (supposedly convenient for attacking attackers from both sides at once) in case of the death of a small number of defenders in one place creates a “blind zone” in the deepening – the advantage immediately turns into a serious problem.

The building was seriously restored in the eighties of the 20th century. At the same time, stylization under the Inca masonry was often carried out. So it is now very difficult to determine where the modern restoration, and where the tracks of the Inca repair, although in some places it is still visible, and it pleases.

A very non-trivial object is directly opposite the “fortress”. From afar it produces the impression of rocks “licked” by a powerful glacier (close forms in nature are found). But there are a number of strangenesses.

Therefore, apparently, the giants had better technology than the current ones

Firstly, there are no such powerful glaciers nearby.

Secondly, neighboring rocks do not have something like this

In the third, Zalizannost is present not only from the top, but as it is not strange and on the sides, as you can see below they are considered vertical. 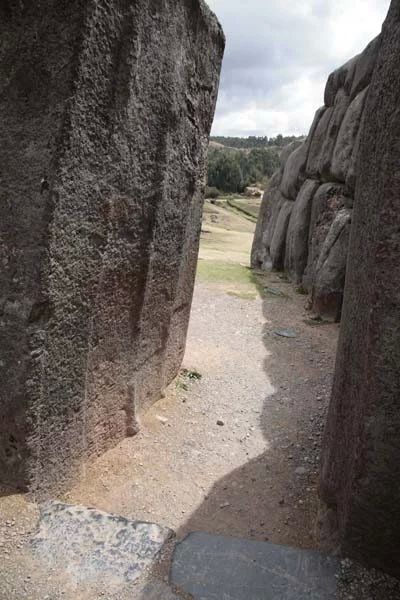 And fourthly, the rock seems to be covered with some kind of “glaze”. The outer layer approximately one millimeter thick differs sharply in its content and color from the material below, and of course the samples were taken by the scientists for research, but as you can guess, they are nothing said. Thanks to this “glaze”, the rock is now used as a children’s hill, with which adults are happy to go (high quality of slip is checked and members of the expedition).