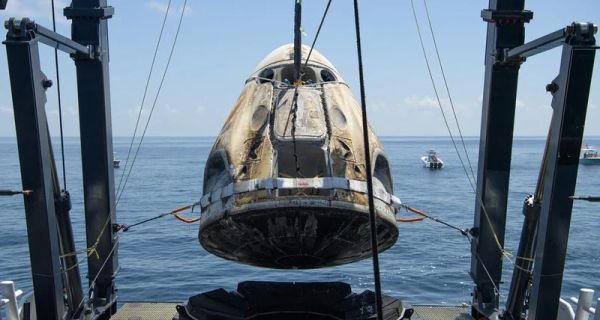 Last Tuesday, SpaceX officials said they found unexpected damage to part of the Crew Dragon space capsule after the first astronauts were on board the spacecraft this summer.

A few months after the success of the first flight of Crew Dragon, Elon Musk’s company admitted its mistake

Recall that the Demo-2 mission delivered NASA astronauts Bob Behnken and Doug Hurley to the International Space Station on May 30, 2020. The two men stayed there for two months, then withstood a fiery fall through the Earth’s atmosphere and splashed down in the Gulf of Mexico in August.

But when the company came to its senses and carefully examined the toasted space capsule, researchers noticed something unusual: deep erosion on the Crew Dragon’s heat shield.

This thermal protection system is a set of heat-resistant tiles that cover the vulnerable bottom of the spacecraft. They protect Crew Dragon by deflecting and absorbing heat, which can reach 2,000 degrees Celsius, while the space capsule falls into the atmosphere upon its return to Earth.

SpaceX admits it expected “some” wear on the capsule, but not that heavy. “We found a little more erosion on the tiles than we would like to see,” Hans Koenigsmann, SpaceX’s vice president of flight reliability, told reporters.

Königsmann said the damaged portion of the heat shield was close to the “tension ties” that connect the Crew Dragon to its large cylindrical barrel (the barrel helps propel the spacecraft in orbit, but is thrown off before the ship begins the reverse maneuver). One of the four areas surrounding these tension ties was deeply abraded by the incandescent plasma as Benken and Hurley returned to Earth.

Fortunately, despite the unexpected problem, the spacecraft and its crew returned home safely.